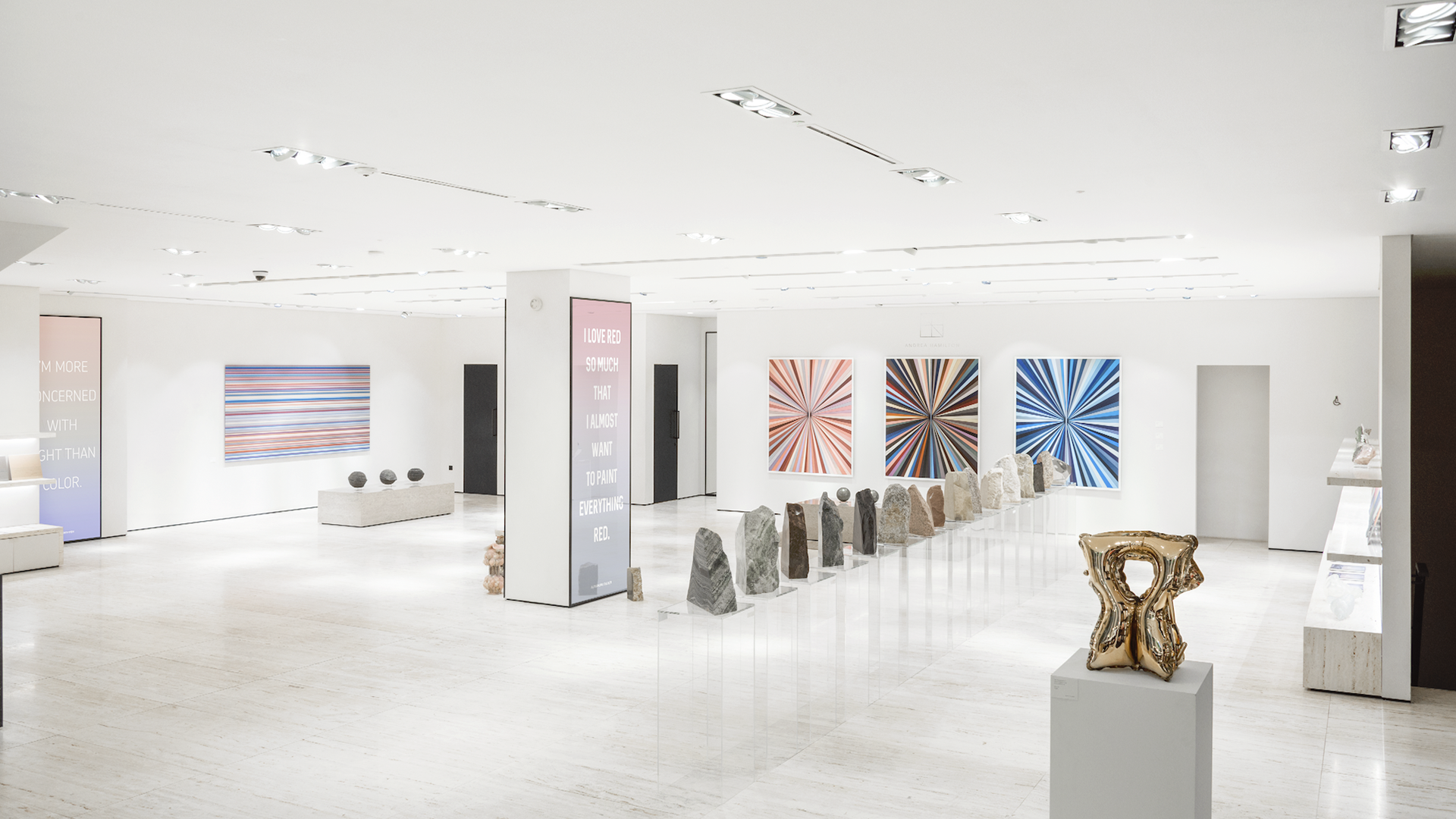 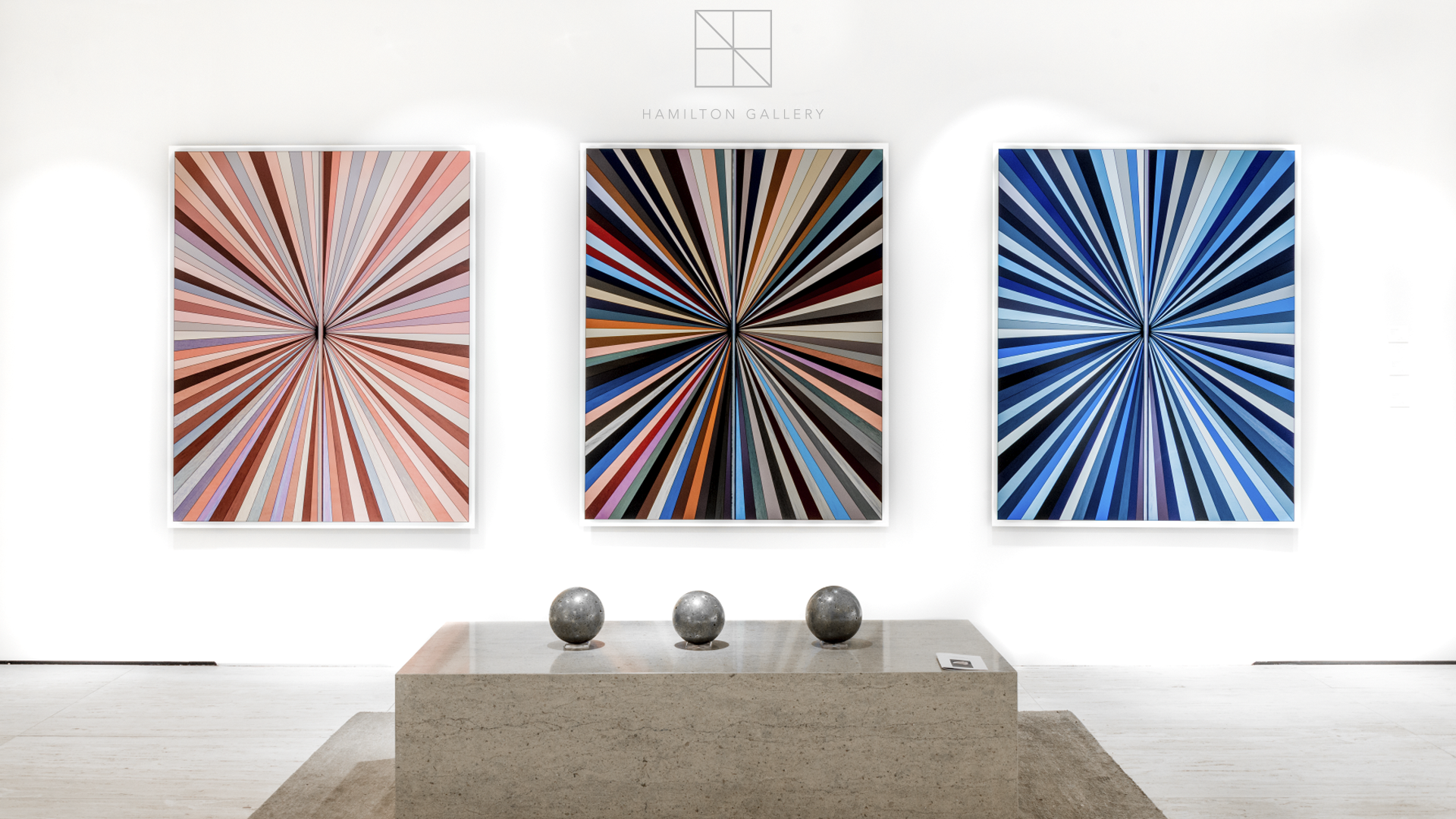 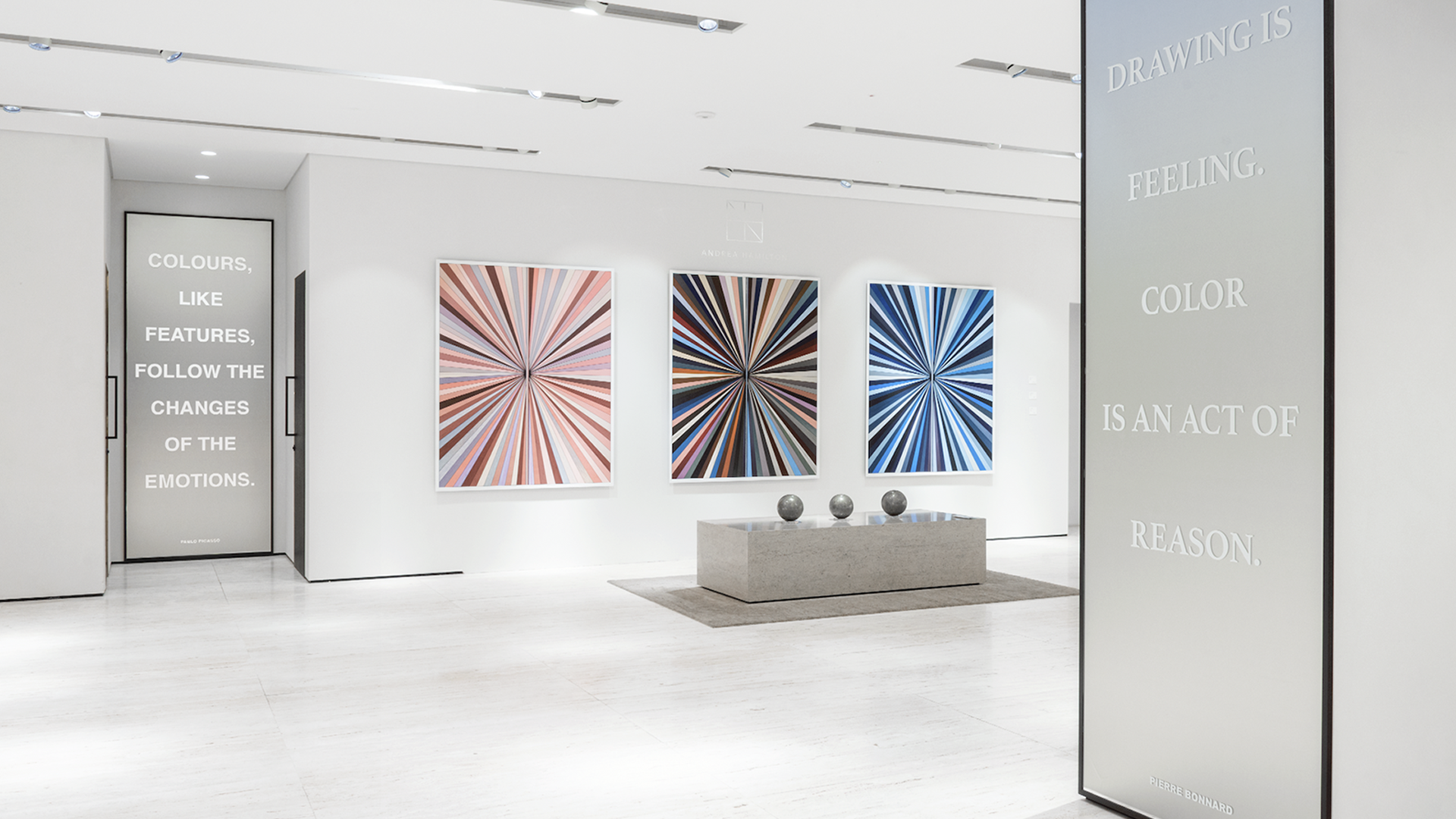 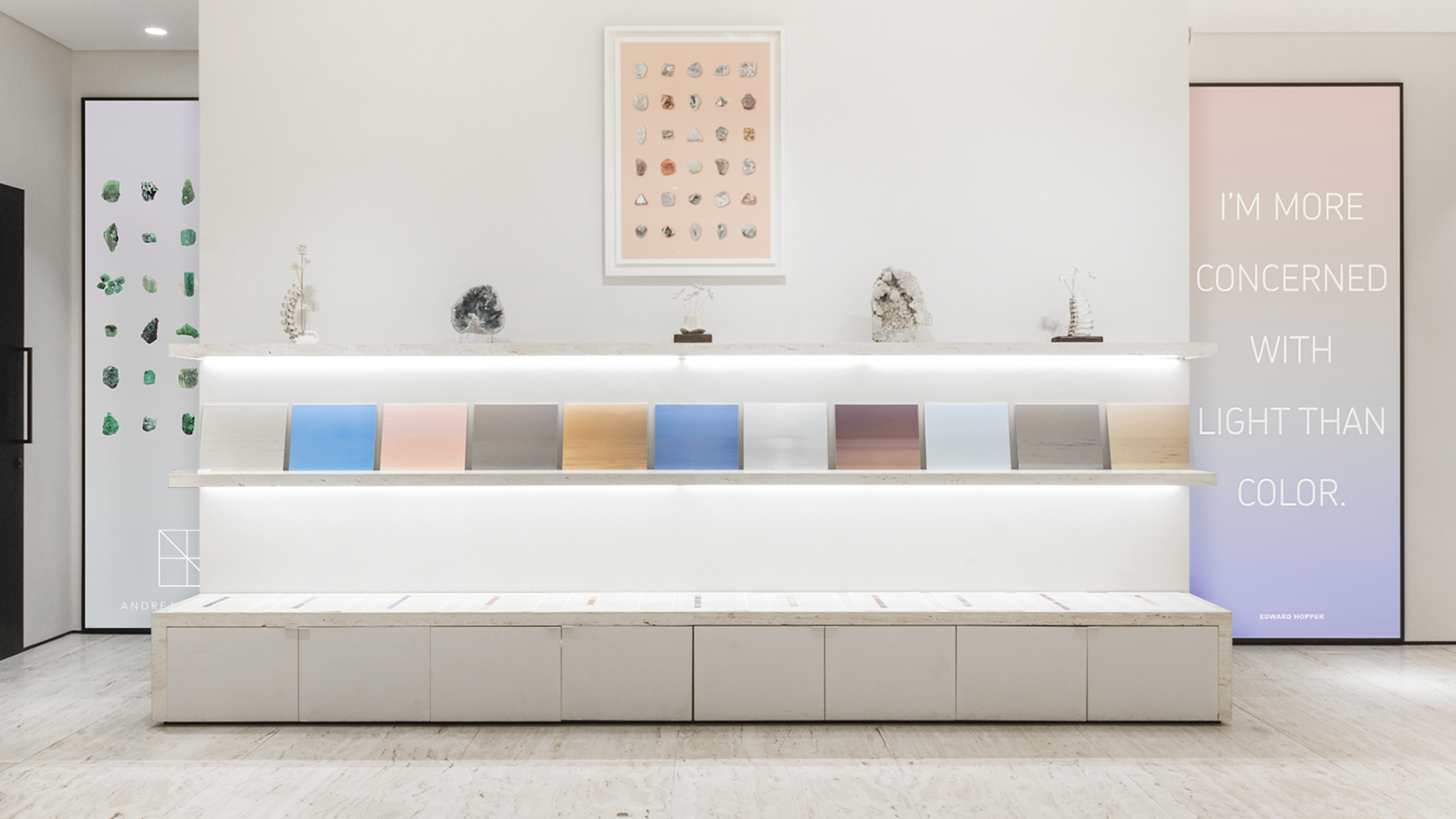 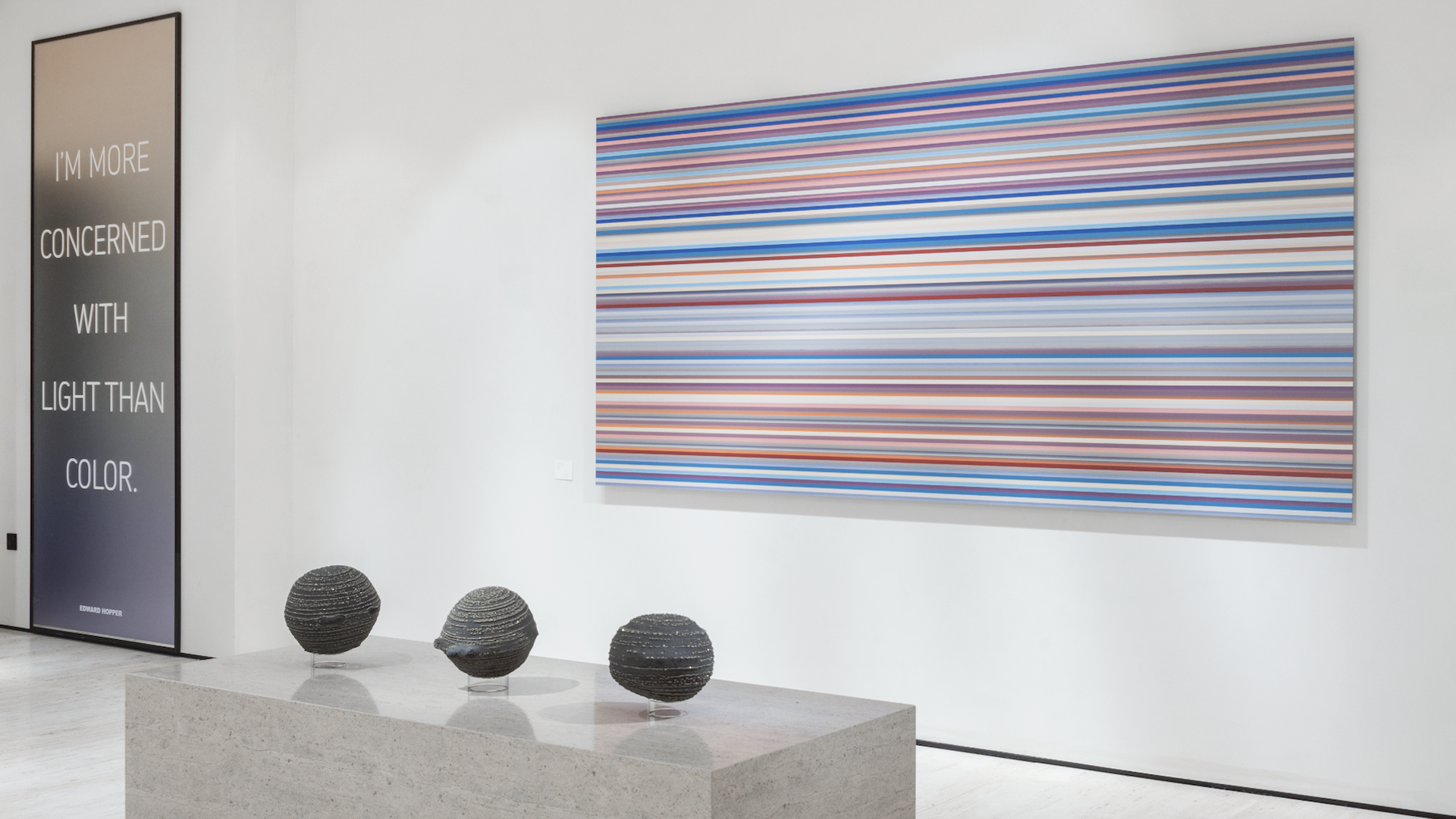 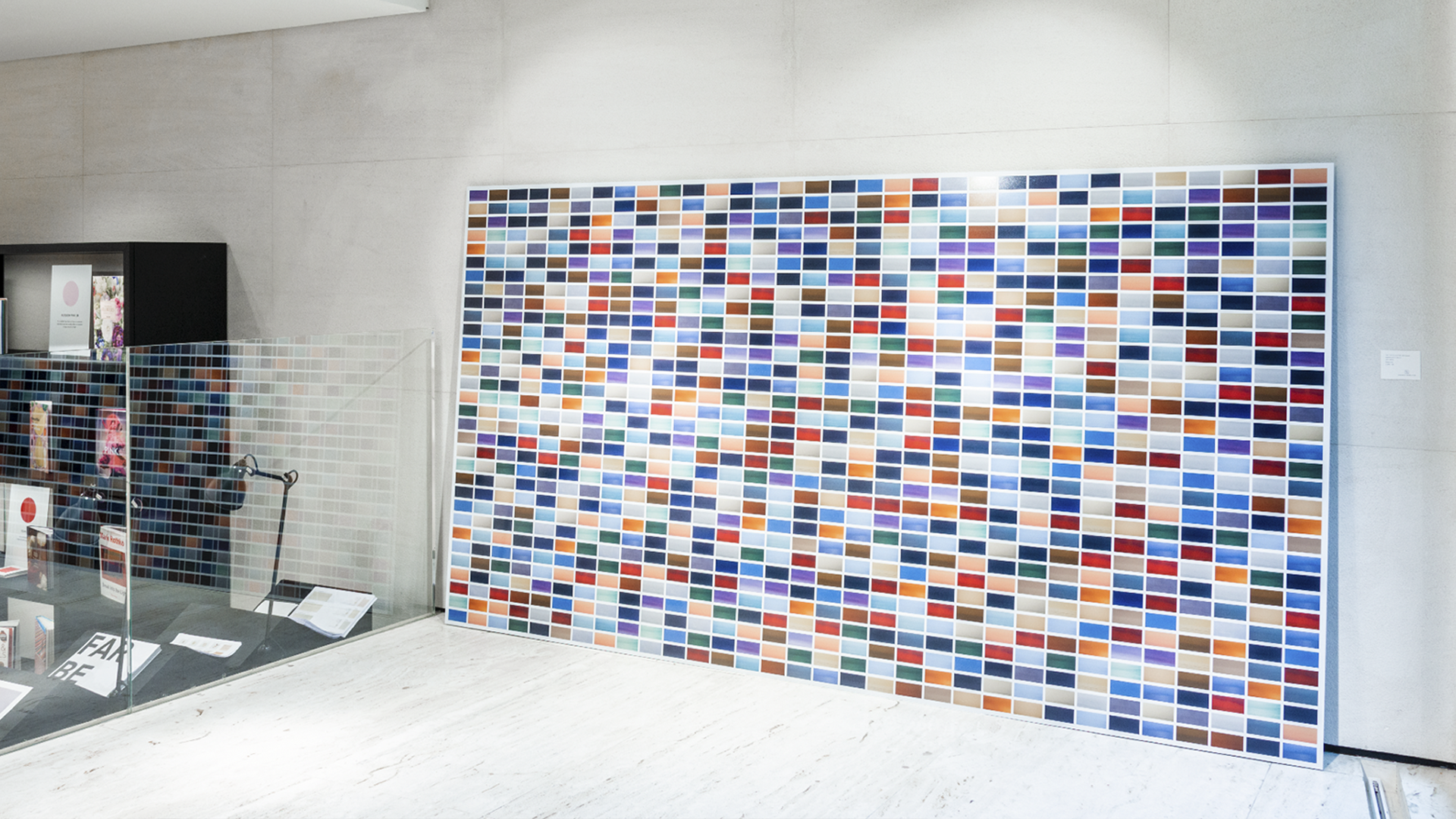 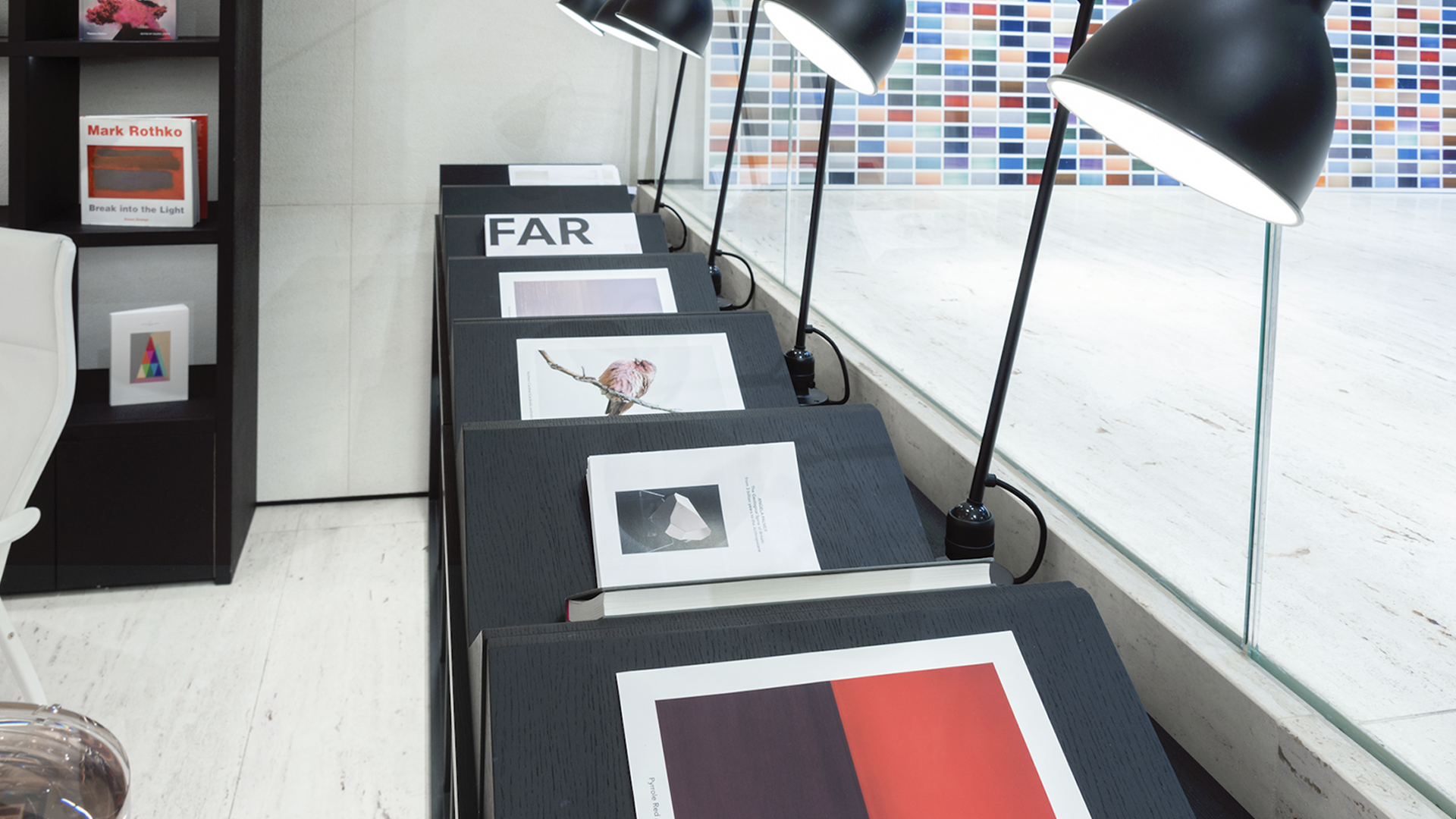 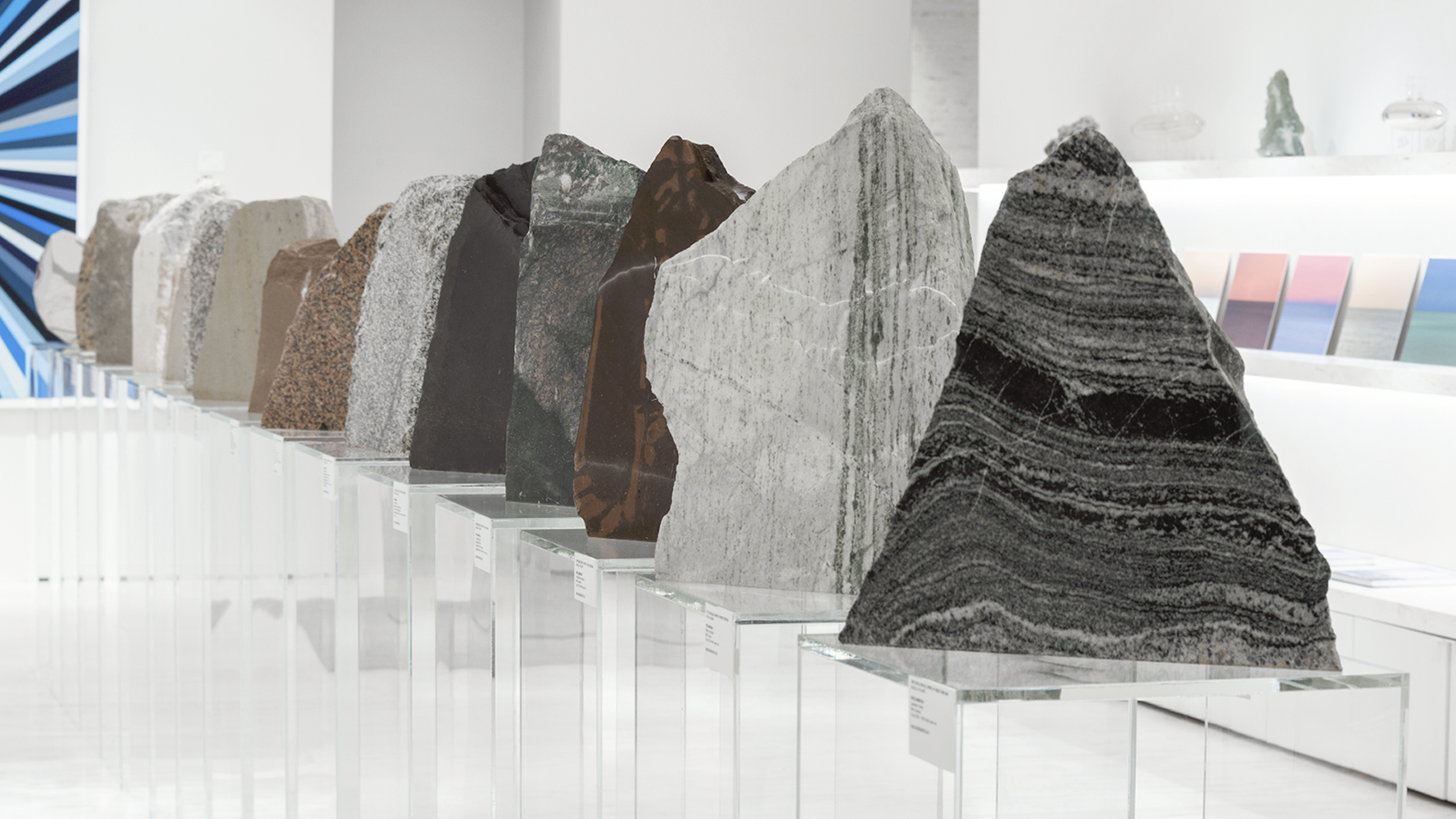 Travels Through Colour and Time is Andrea Hamilton’s last exhibtion at 127 Sloane Street. Her first major show in London for five years, it features large-scale works from the recent Horizon Bursts and Horizon Strips series. Returning to one of her most well-known motifs – the sea – Hamilton’s new works take their inspiration from her expansive catalogue of sea colours observed from natural reflected and refracted light: ‘Horizon Bursts’ feature three-dimensional optical illusion collages comprised of slices of Hamilton’s Seachroma studies. Representing the horizon, energy, and our preoccupation with time, each ‘Burst’ is drawn entirely from a colour palette of natural phenomena. These uniquely coloured slices come from Hamilton’s extensive photographic library ‘Nomenclature of Seachroma’, captured over twenty years.

Predominantly vertical, Hamilton plays with the natural horizon line as a point of visual and mental focus, pulling us into a nexus of energy. Radiating like halos they touch on aspects of spiritual representation. By contrast ‘Horizon Strips’ are layers of the same: colours out of time spanning many years. Presented like strata, Hamilton challenges us to question how we view time – is it linear or compressed into moments? The ‘Bursts’ and ‘Strips’ continue themes present in Hamilton’s earlier Water Works series foregrounding both the symbolic power of the horizon and a sense of spiritual epiphany. Whilst the ‘Horizon Burst’ collages directly connect with Christian concepts like the halo– Hamilton’s new work draws on abstraction and the history of Colour Field painting movement.

Hamilton has invited two other artists to present their sculpture in her exhibition; as they both share Hamilton’s preoccupation with time and our reason for existence. The conceptual sculptor Angela Palmer is also fascinated with documenting: mapping the unseen, that which is beyond the visible, whether it is the human brain an Egyptian child mummy or geological strata. In Anthropocene, she takes our modern human age as a starting point and worked backwards, looking at what came before. Palmer sourced 16 rocks from every geological period spanning 3 billion years, tracing in a complete timeline the creation of England, Wales, Scotland and Northern Ireland from their position near the South Pole to the present day. The final element in the geological spine is a rock-like structure in mirror-polished steel. It symbolises the Anthropocene, the new geological epoch reflecting the hand of man. The eternal truth of entropy is the guiding light of British artist Emma Witter’s work. She utilises intricate bone structures to create fragile, flower-patterned forms, forming deeply beautiful memento mori, where the depths of our bodies are celebrated rather than mourned.

All three artists share a common bond in their urge to create and map the underlying structure of things: they are interested in how profoundly one can explore a subject. They reveal how infinite nature can be, and show that the deeper you go, the more there is to find. It is all about what lies beneath.

The event was serenaded by composer Hugo Ticciati and violinist, Gareth Lubbe.