Andrea Hamilton’s Panterfällen I comes from a series of photographic images taken in 2008 during a trip to the Biological Museum in Djurgården. Built in 1893 by the architect Agi Lindegren, the museum pioneered the use of dioramas on a grand scale. At its heart is a 360 degree diorama which encompasses the entirety of the Swedish natural landscape, from southern coasts to the landscape of northern Scandinavia, showcasing a myriad of Nordic animals. 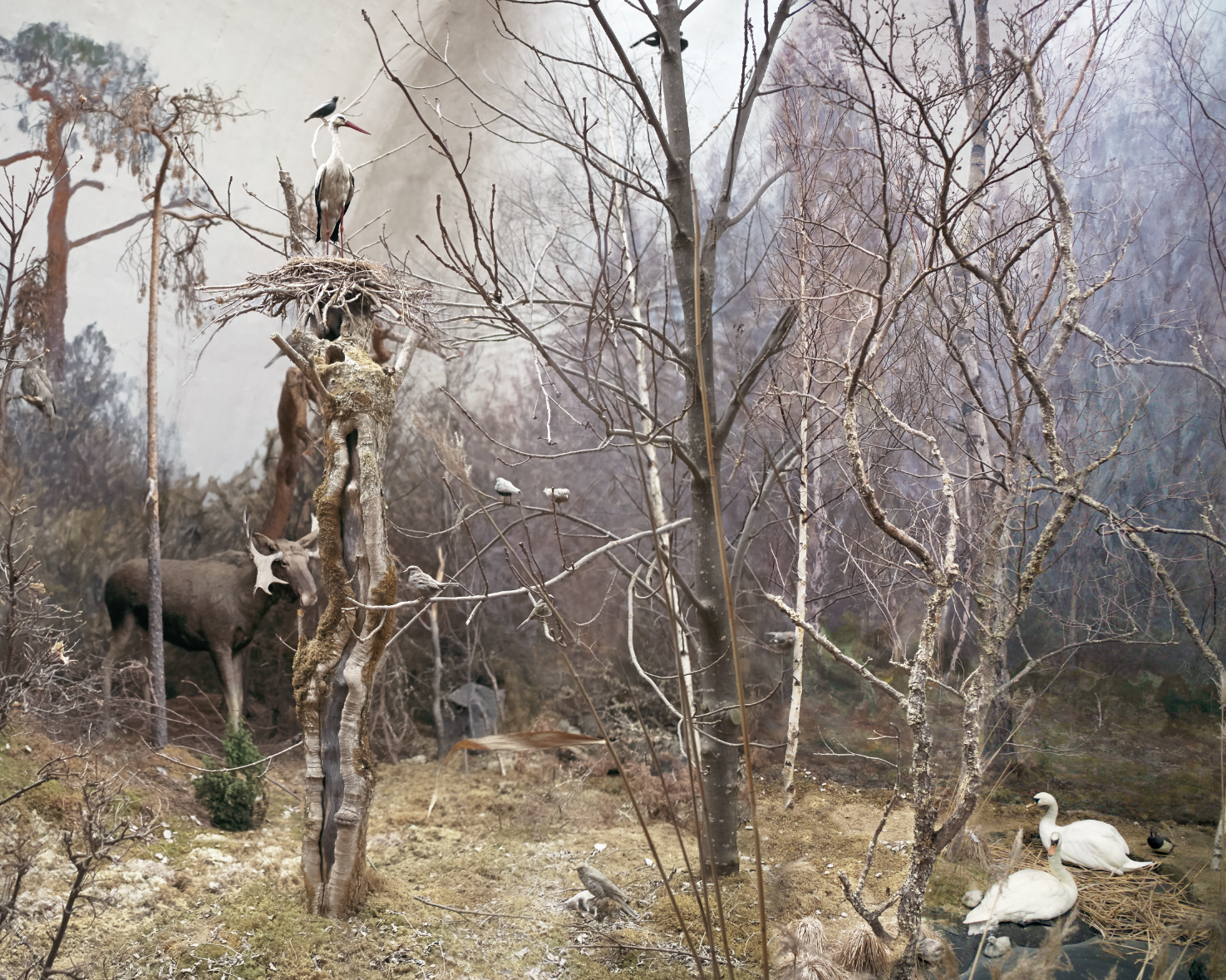 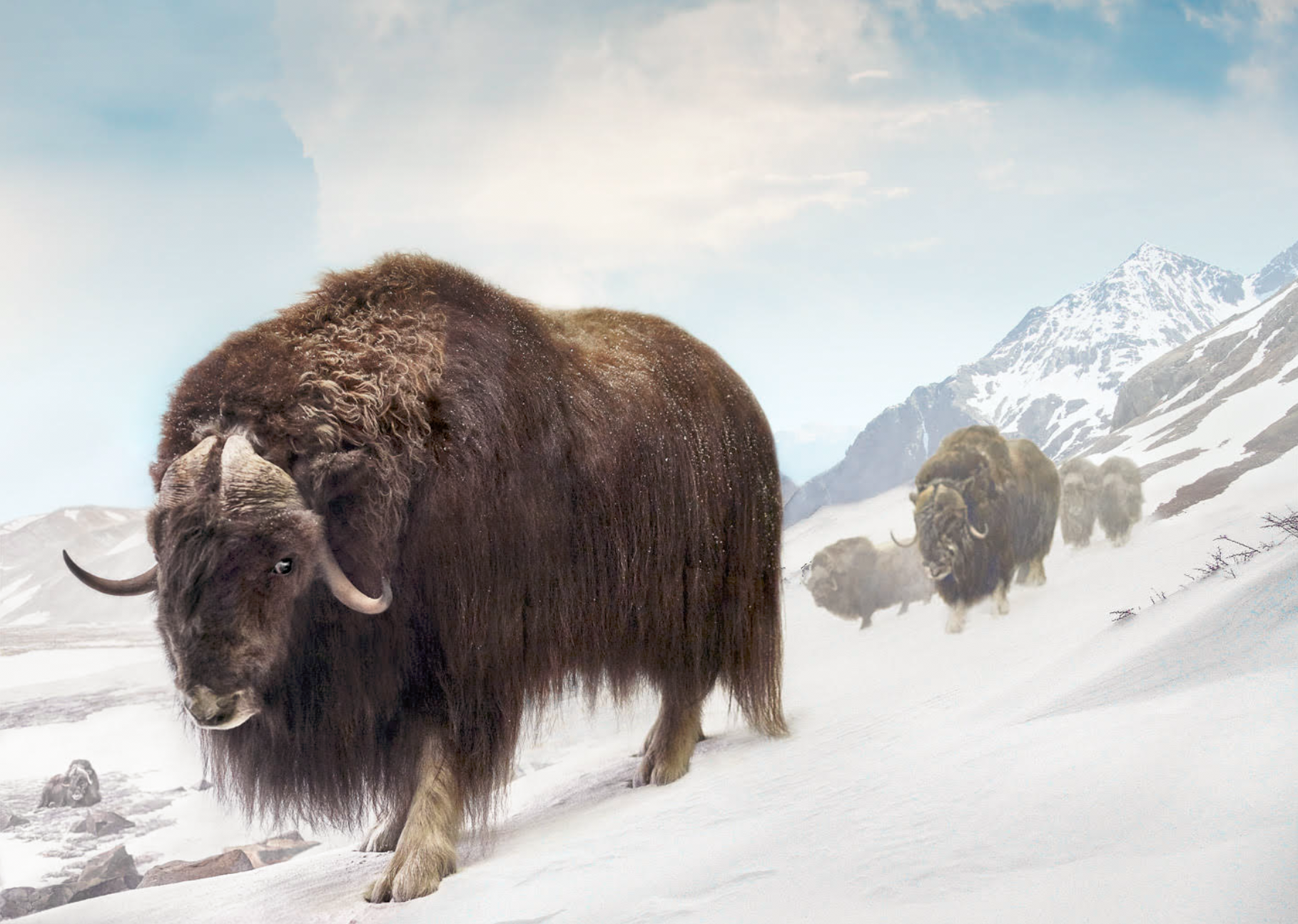 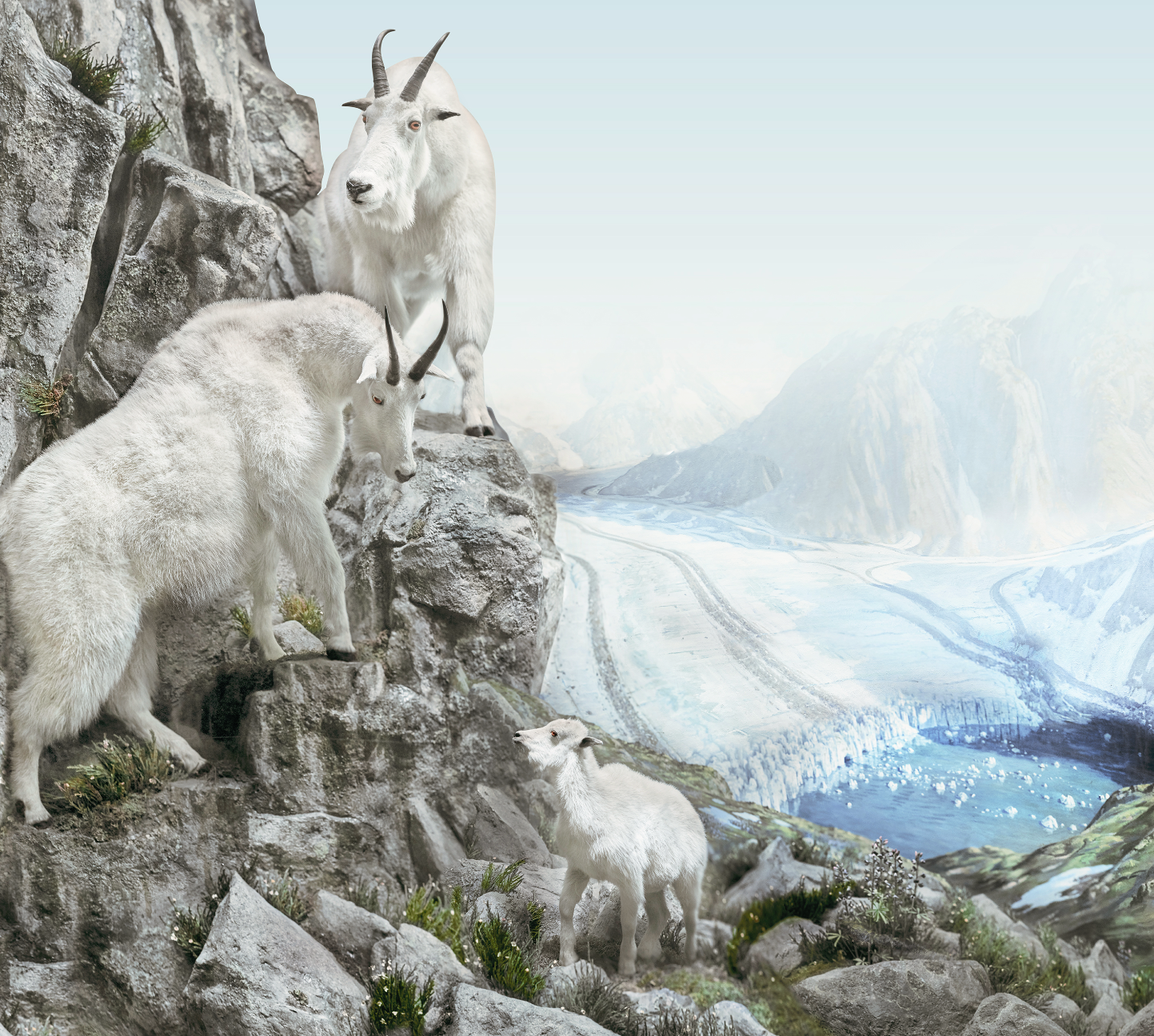 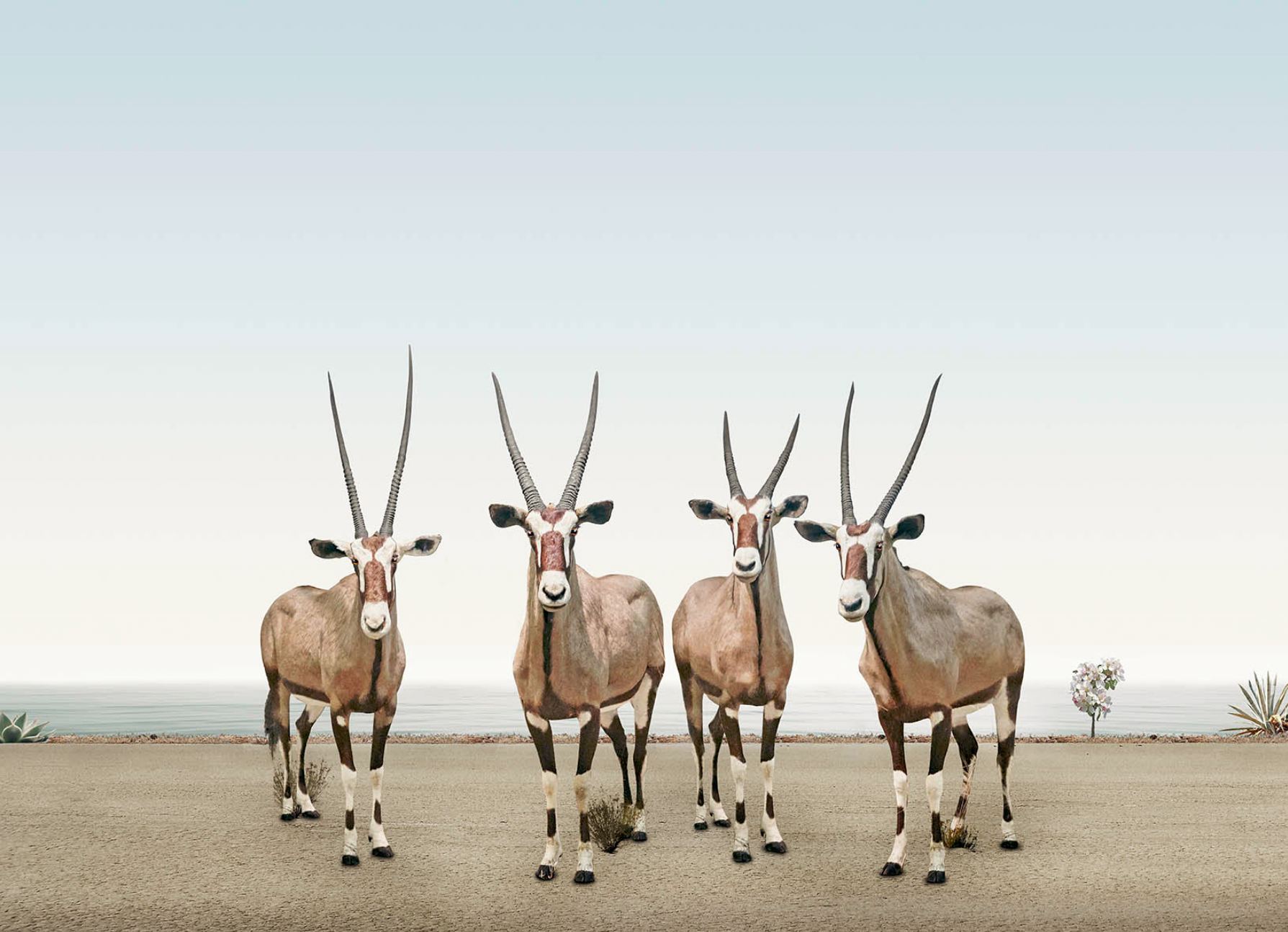 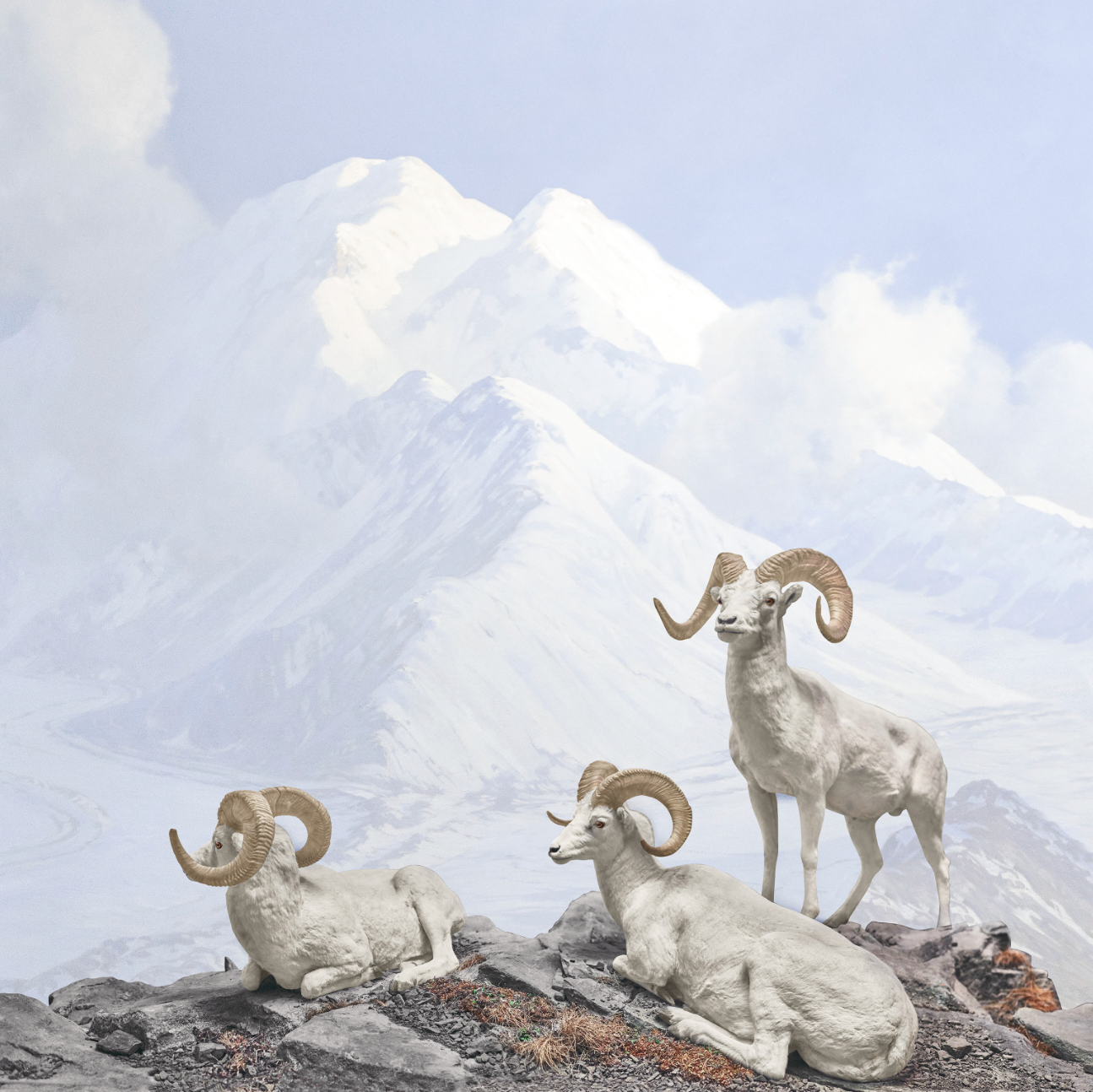 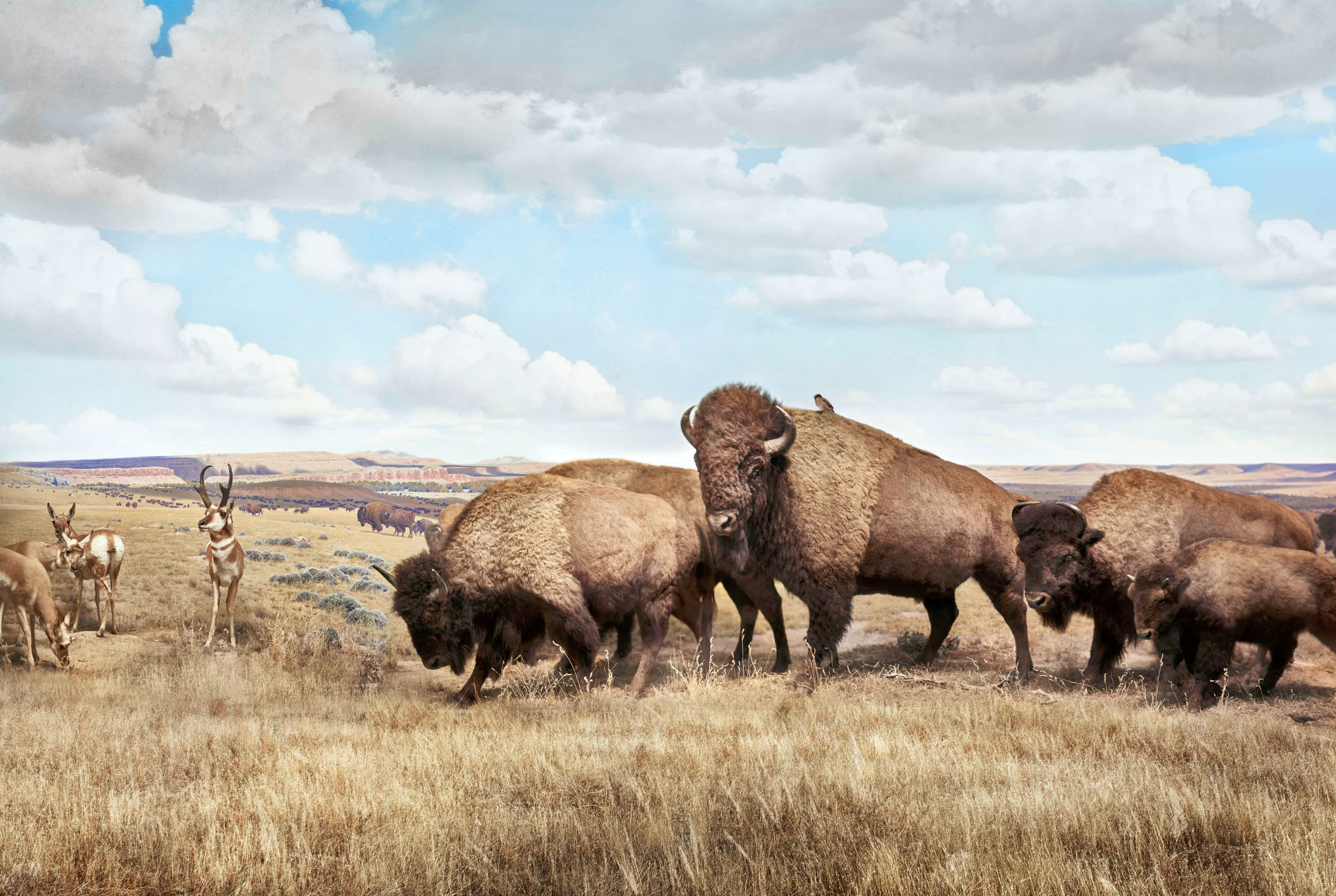 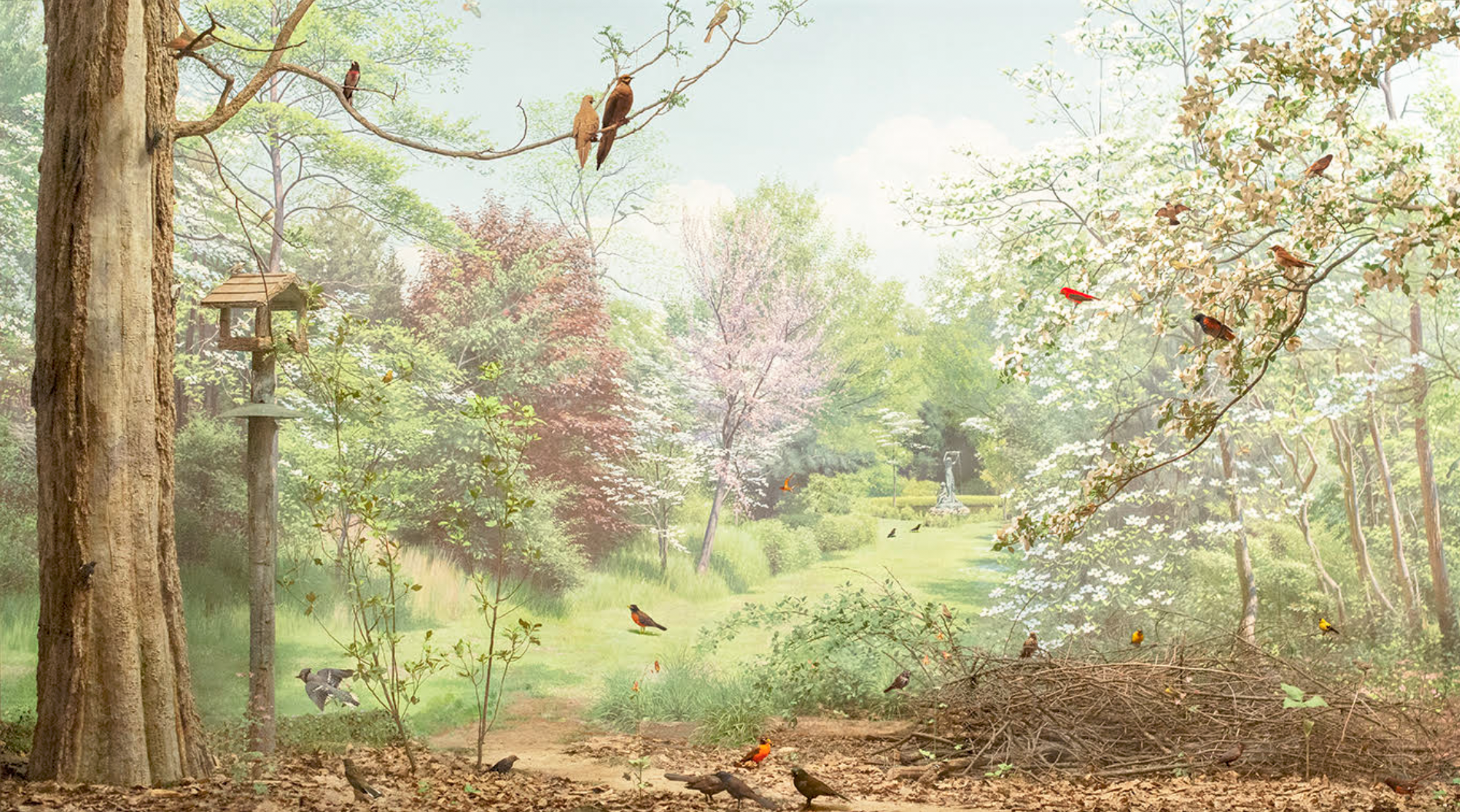 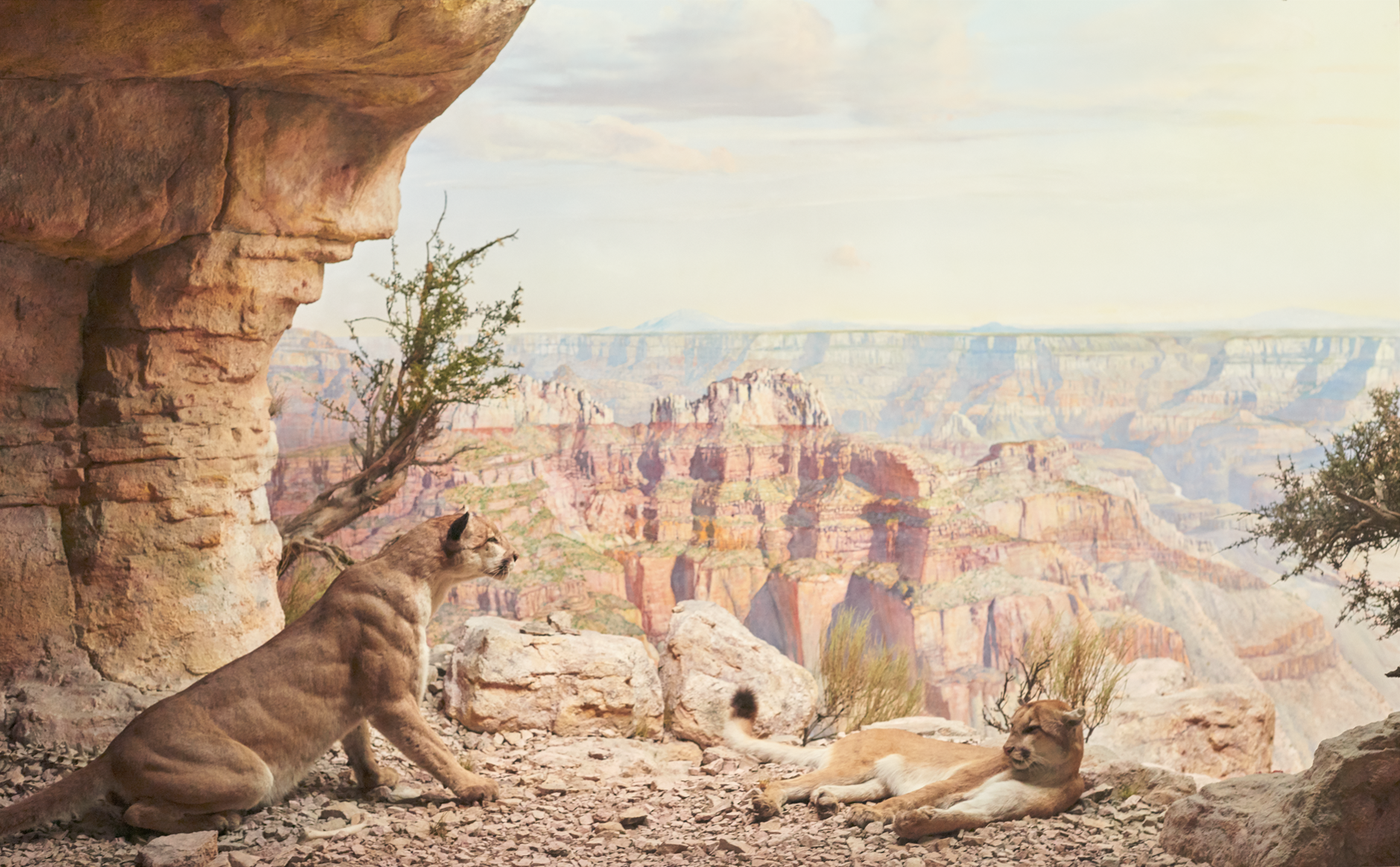 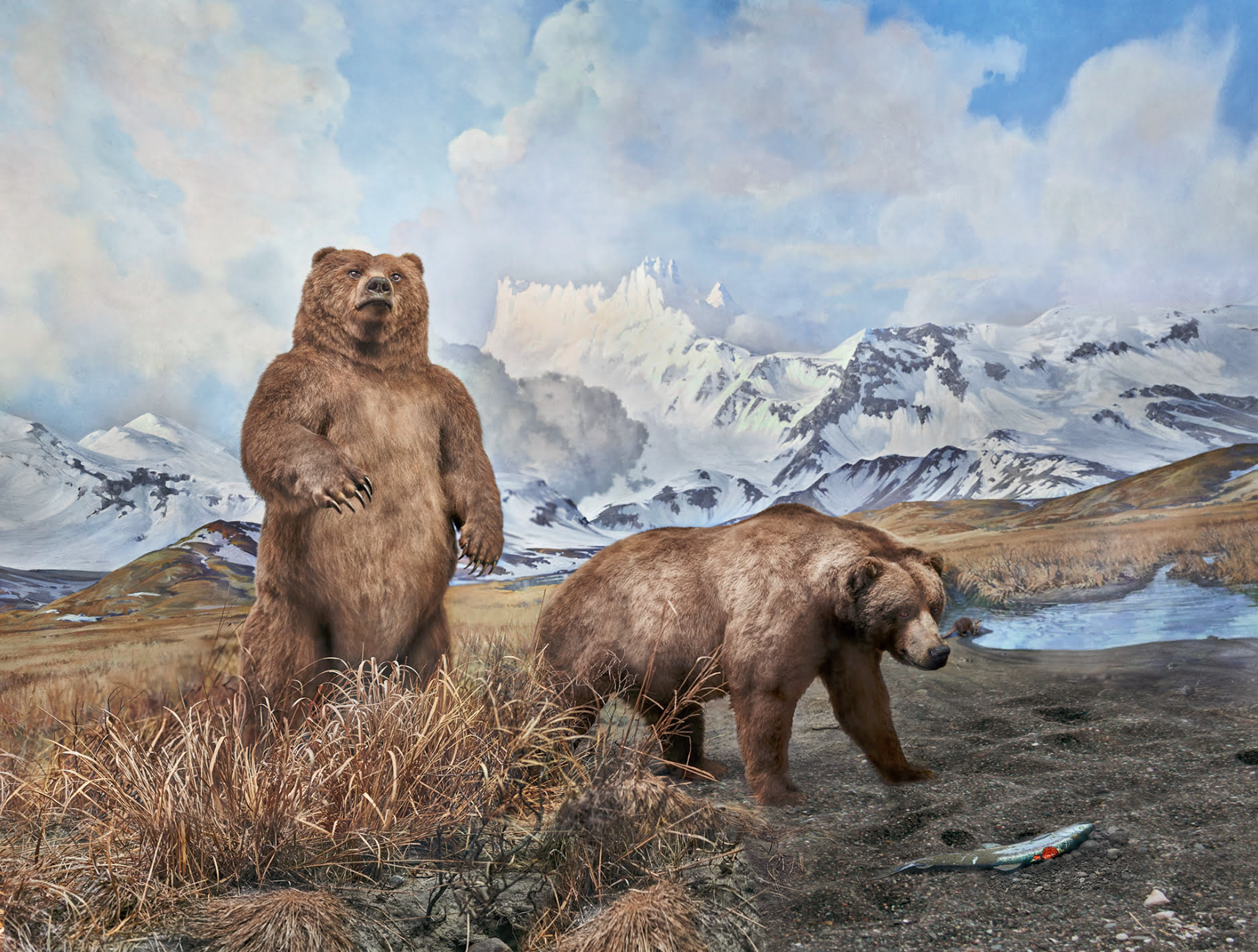 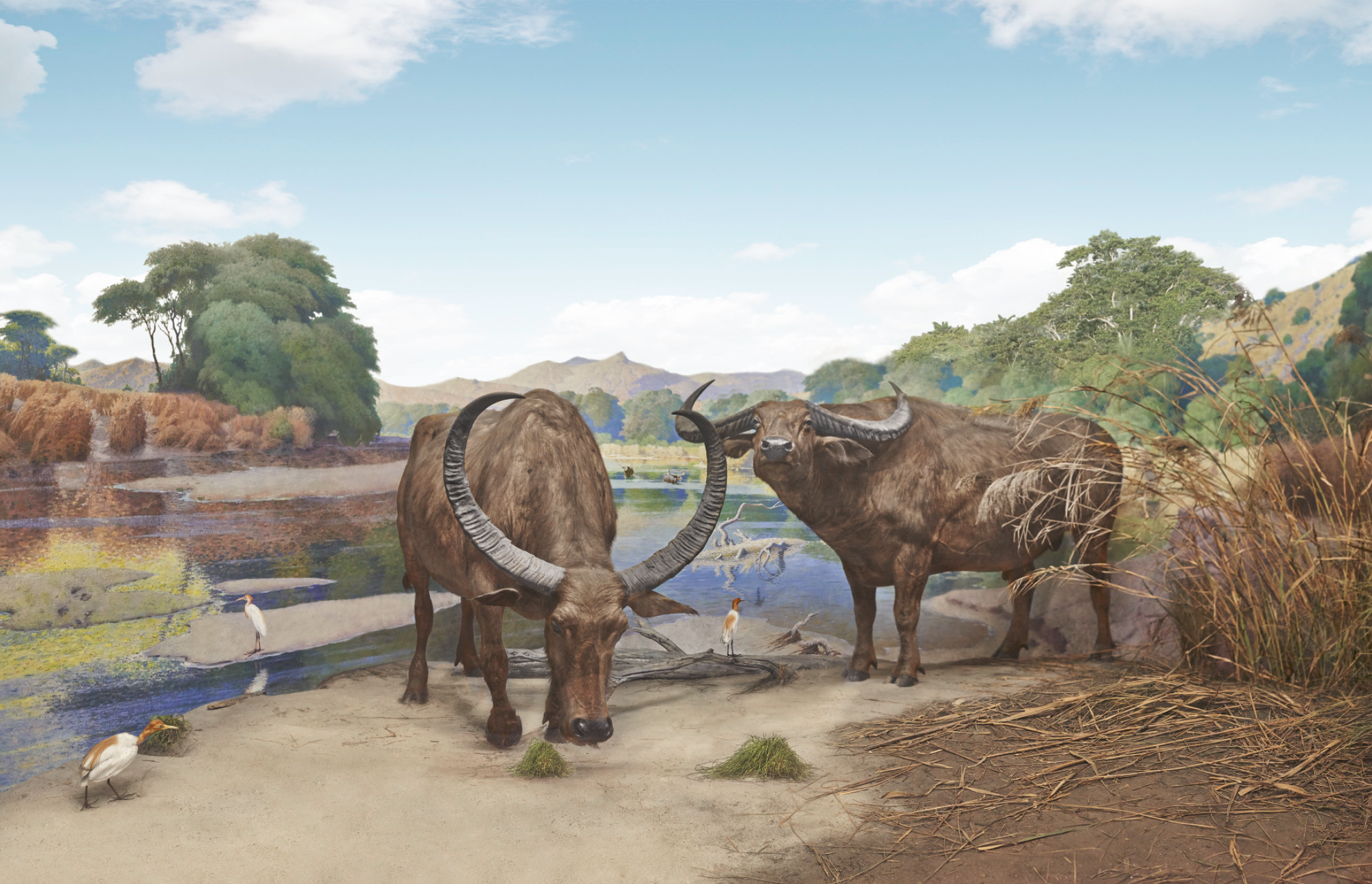 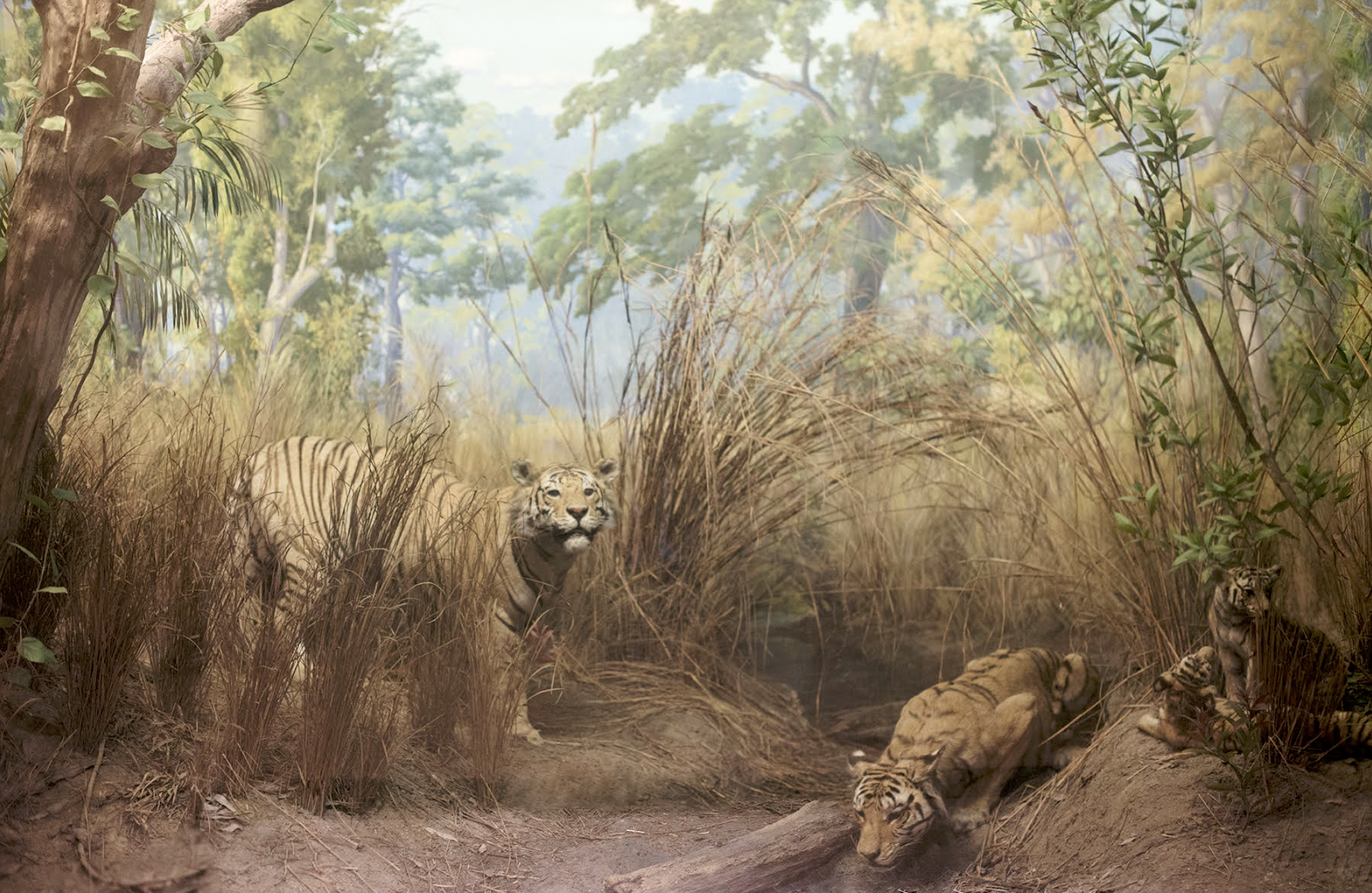 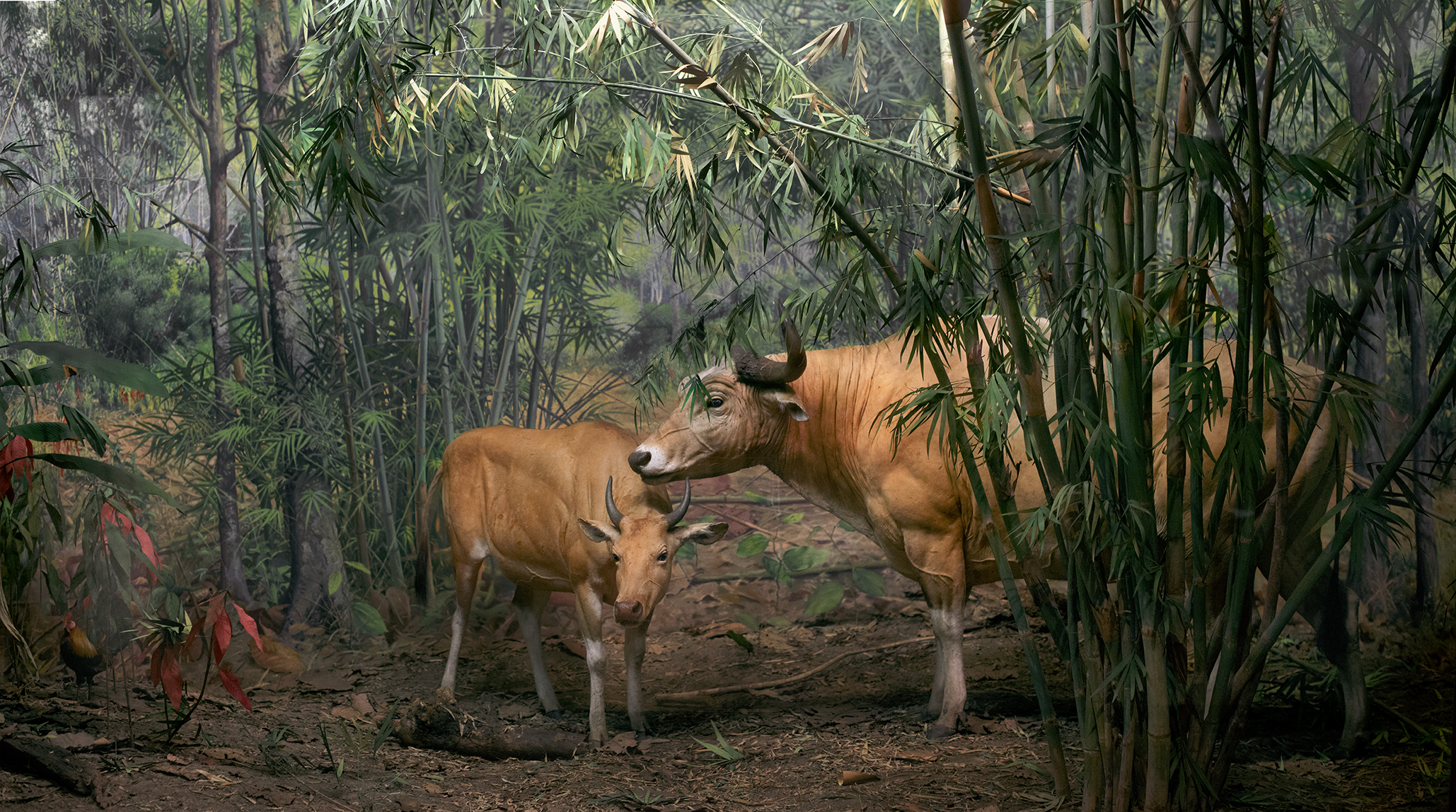 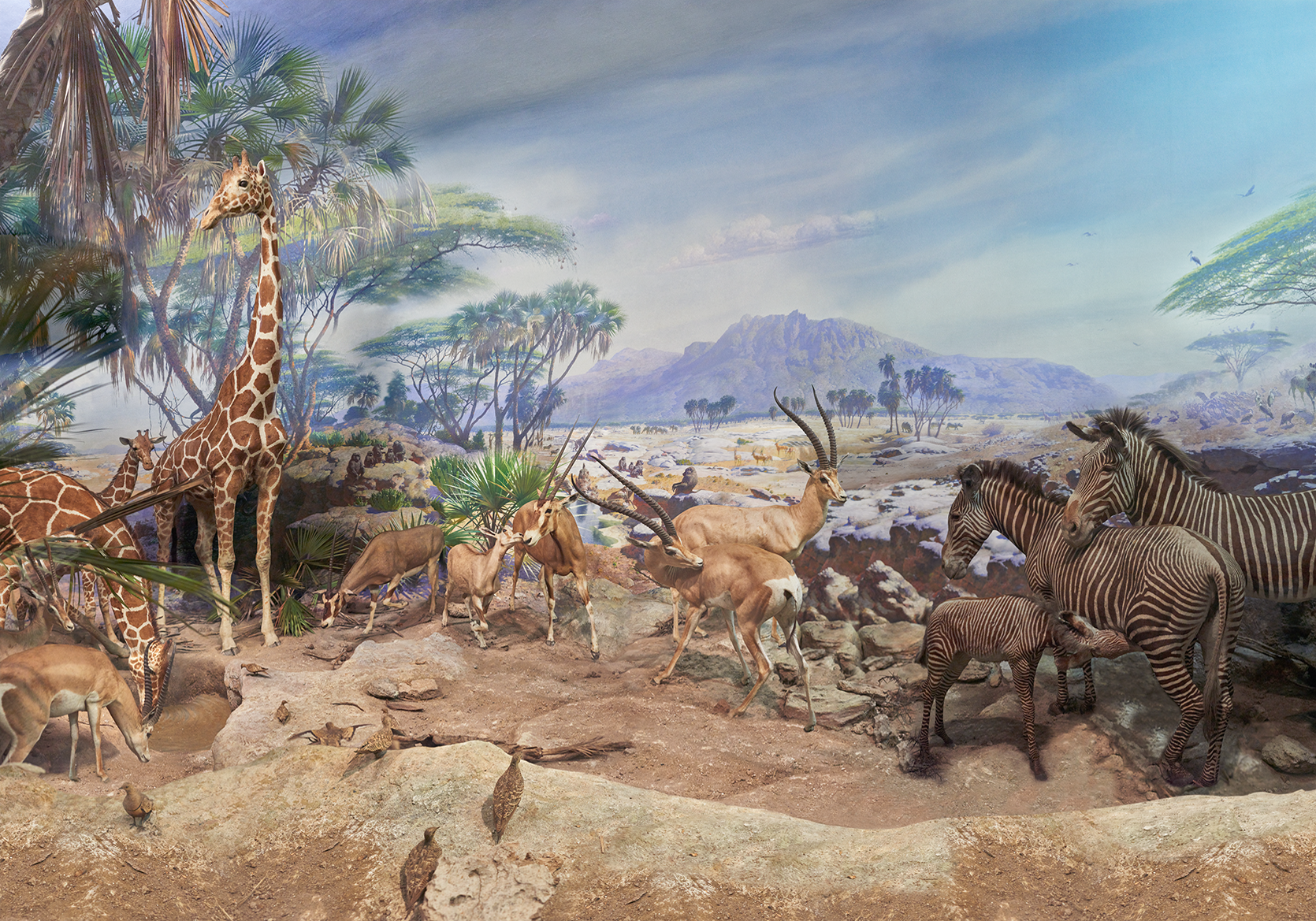 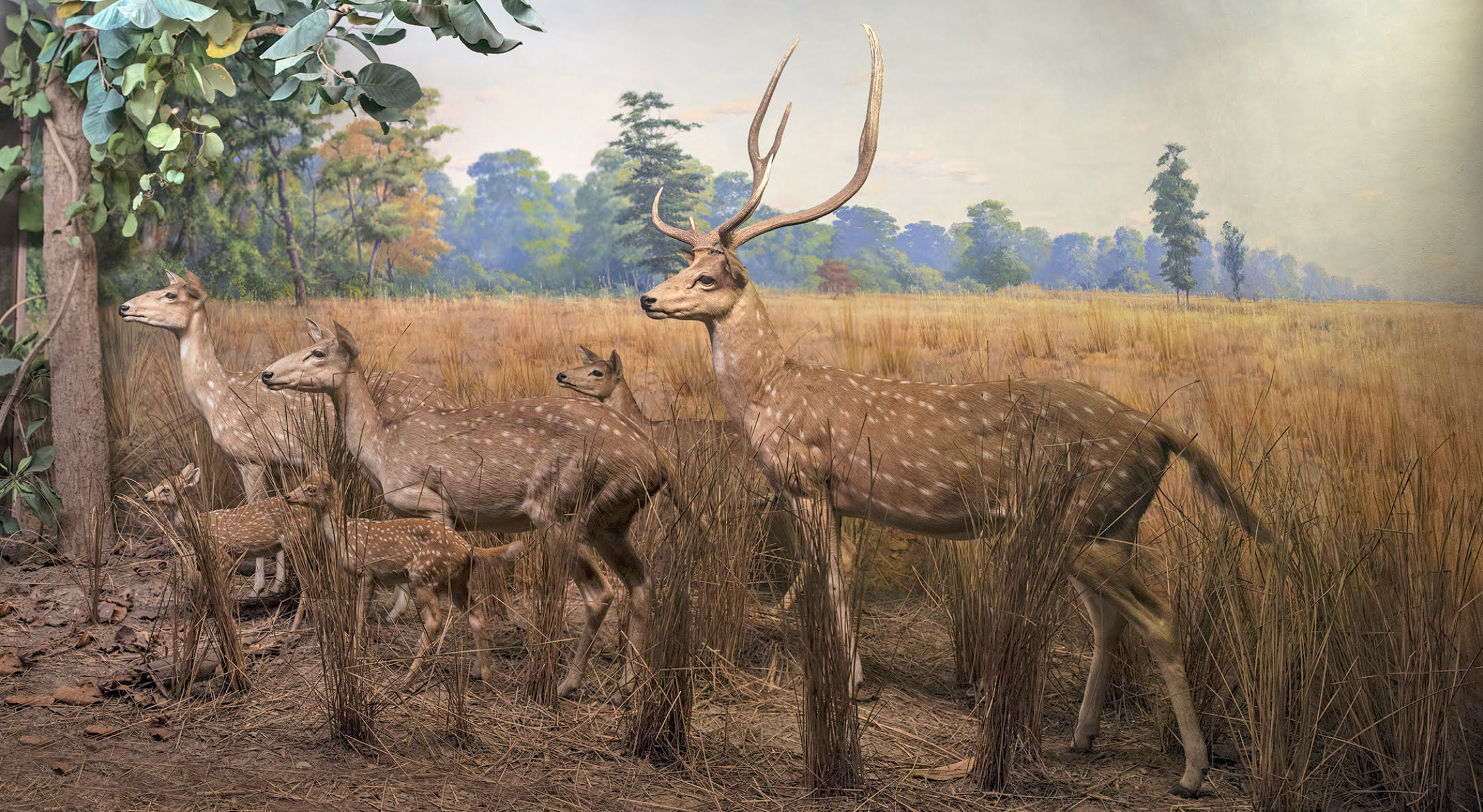 A portal is a gateway or entry to something else, in this case to the natural world preserved in the diorama displays in museums. I have long been fascinated with these displays that combine so many fine art skills. The backgrounds were often painted by well-known landscape painters, a display of national pride. Photography compresses the three-dimensional to two dimensions, heightening the feeling of reality. In my work, I often took hundreds of images from many angles and built up the scene for a single picture. At times, I have combined elements from real animals or nature with the displays.  Each image has taken several weeks to produce. Some of the dioramas featured in my photographs no longer exist.  I realize that in parallel with the natural world, the diorama is being phased out for virtual reality displays. This series is also available in black and white as silver gelatin prints, again inbuing these images with a sense of time travel.

Andrea Hamilton’s Panterfällen I comes from a series of photographic images taken in 2008 during a trip to the Biological Museum in Djurgården. Built in 1893 by the architect Agi Lindegren, the museum pioneered the use of dioramas on a grand scale. At its heart is a 360 degree diorama which encompasses the entirety of the Swedish natural landscape, from southern coasts to the landscape of northern Scandinavia, showcasing a myriad of Nordic animals. The large painted dioramas are the work of Bruno Liljefors, famous for his dramatic paintings of birds and animals. Also a hunter, he never exaggerated the ferocity of the predator or the pathos of the prey; his pictures are devoid of sentimentality. He was nicknamed “Panterfällen,” owing to his fascination with patterns found in nature. Andrea connects us to the hand of the artist through the use of Panterfällen in the title of her work, because the painted diorama emerged at the same moment as photography: French artist Louis Daguerre invented photography with his Daguerreotype, patented the diorama in 1822, and his first Daguerreotypes were of them.

Soon after, the diorama was adopted as a means of staging lifelike habitat scenes for a viewing public, thanks to Carl Akely (1864-1926), naturalist, taxidermist and dioramist of the American Natural History Museum in 1889. Akely resurrected Renaissance methods of painting on curved backgrounds. The lifelike displays were created to educate and engender feelings of wonder for the natural world. But soon our capacity for international travel diminished our experience of these museum displays which could not compete with the hand held camera. This loss is best illustrated in Hiroshi Sugimoto’s black and white photographic images of dioramas from the Natural History Museum in New York. Known as “Diorama“, these dioramas are internationally recognized as premier examples of the fusion of art and science. Hiroshi Sugimoto uses the camera as a tool to resurrect the make-believe. He achieves this by reversing the three-dimensional process of the diorama. Unlike that process, which was additive, Sugimoto’s is subtractive: instead of adding depth, he removes it through photography. Instead of creating color, he renders the scenes in black and white. Instead of mimicking scale, he reduces it to the size of a portrait. “Now I’m re-photographing the diorama, based on the photography,” the artist said. “So many layers of transformation – that’s very conceptually interesting”.

Hamilton is interested in the transformative power of the camera to turn one representation of nature into another – the diorama into the landscape portrait. The camera stages for us something that is hard to recover, namely that someone is doing, or once did, the looking, and thus was involved in the drama of the experience of the natural world. By reuniting the diorama with its early partner, photography, Sugimoto resurrects an old museum art form. With Panterfällen I the artist Andrea Hamilton is taking things back to the moment of creation, and the mystery of the painted scene. For the fine art photographer today, the digital image offers multiple opportunities to manipulate the scene. Working as Liljefors used his paintbrush, she can both add and subtract elements, merge and fuse multiple angles, incorporate foreground and background.

What results is a strange encounter with nature many times removed. It is not make-believe, but surreal. There is a message of conservation embedded in the image, and perhaps a commentary on our distance from nature. Nature dioramas emerged at a moment in time when the balance between man and nature tipped. Nature was no longer something we had to survive; it was suddenly at our mercy. As our nagging sense of our disappearing world increases, our means of representing it turns to irony, as if it is already lost. Perhaps there is an inverse relationship between proximity and awareness: the more distanced we are from nature, the more acute our awareness of its fragility. And the more ironic our means of capturing this awareness, the more perilous our relationship to the thing itself.