Celestial Black  |  Connections: How colour interacts with the wider world 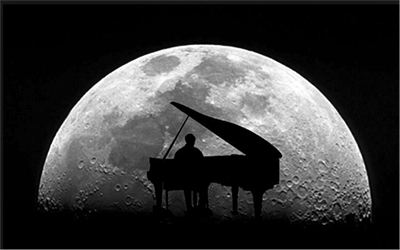 “The black of outer space feels like the timely moment of silence after a long musical passage performed by a symphony orchestra. Then, as the music segues into a new direction, it’s the reverb that still bounces off the concert hall walls that reminds us that something has happened before and possibly will happen again. And it is this gentle tone that fills this void of silence that one can liken to the blackness of outer space.”

― Amanda Lee Falkenberg, composer of THE MOONS SYMPHONY
(in conversation with Andrea Hamilton on July 18, 2019) 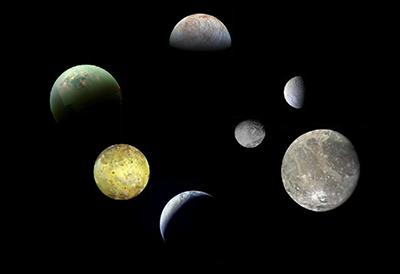 What does the depth of blackness behind the stars and planets represent? For generations, composers have filled this void with scores that speak volumes about our relationship with space. It is 100 years since the London Symphony Orchestra first performed Gustav Holst’s celebrated seven-movement suite, Planets, but it is the Moon in her canopy of night which has inspired some of the most iconic pieces of music. The impressionist composer Claude Debussy wrote his masterpiece, Clair de Lune in response to Paul Verlaine’s poem of the same name, and Dvořák’s aria Song to the Moon, from the opera Rusalka, became the soprano Renée Fleming’s signature performance. She believed it brought her luck: “Moon in the dark heavens, your light shines so far. You roam over the whole world, gazing into human dwellings.”

One of the most recognisable musical overtures in space comes from Stanley Kubrick’s 2001: A Space Odyssey made one year before man landed on the moon. The film begins in total darkness, with only the sound of avant-garde Hungarian composer Györgi Ligeti’s orchestral work Atmospheres. A gentle orchestral chaos, which the composer termed micropolyphony, the music keys us into the mood of the film, and sets the viewer up for a big musical payoff later. As the sun rises in the opening image we see three spheres – Moon Earth Sun – then we hear four trumpets play the now iconic overtone sequence C-G-C-E. That marks the start of Richard Strauss’ world-famous tone poem Thus Spoke Zarathustra, written in 1896. It illustrates a central theme of the film: man’s development since the dawn of time and its quest for enlightenment. “I don’t have the slightest doubt that to tell a story like this, you couldn’t do it with words,” Kubrick later said. Strauss would have agreed: he once told his friend, novelist Romain Rolland, “In music one can say everything.”

Strauss got his idea from Nietzsche’s book of the same name, a philosphical raisonneur that the author – no mean composer himself – described as a ‘symphony’. Written in a poetic, prophetic style, its central theme examines how the advance of science was leading people to doubt cultural and religious norms – how appropriate for Kubrick. The book is not open to true interpretation: like a piece of music or how we see the very heavens themselves, everyone takes away their own version of its philosophy. 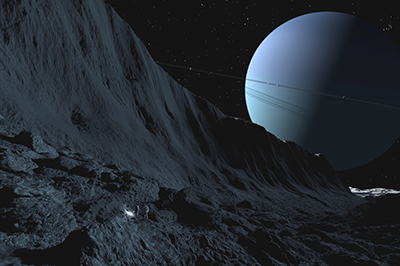 To the composer Amanda Lee Falkenberg, space represents hope: a place of infinite possibility that envelops these celestial bodies. “This limitless, boundless, depth of space is the black ocean that suspends our skies. Its silent cosmic currents allow the planets and stars to dance to the rhythm of its celestial tides.” Despite never having been in space – like Kubrick, Debussy or Holst – Falkenberg brings us on a journey of extra-lunar discovery, translating the awe-inspiring search for life in the outer solar system into one harmonious and life-affirming score. In seven movements, THE MOONS SYMPHONY connects us to deeper understanding of our place in the universe. From the distant perspective of the moons, the music gives voice to something universally felt: a love we share for our planet Earth.

“Through the power of music, I wanted to create an inspiring work of art that connected with as many people on the planet as possible, but also delivered a hopeful and uplifting message that is relevant to the plight of our world today.”


One of the first people to hear Falkenberg’s music was the astronaut Nicole Stott, through the International Association of Astronomical Artists (IAAA). Responsible for curating the 50th anniversary celebration of Apollo 8 at the Kennedy Space Center, Florida, Stott’s objective was to create an immersive storytelling experience of the positive impact on humanity of this first human mission to circle the Moon and to witness Earth rising above that barren gray horizon in space.

Stott has spent 104 days in space, and has travelled further than most: from above our atmosphere to the depths of our oceans. Dedicated to sharing these unique vantage points, she was the first artist to paint watercolours in space and is the co-founder of Constellation Earth and the Space Art Foundation. “There is a strange interaction between this planetary body we know as our home, rising up above the horizon of some other planetary body in space.” 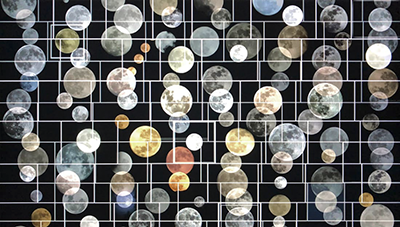 On the other side of the Atlantic, the composer Amanda Lee Falkenberg had begun work on THE MOONS SYMPHONY written after 20 months of scientific research, consulting with experts from NASA/JPL, Harvard, Johns Hopkins and University of Michigan, Falkenberg had found that experts were increasingly focused on the moons. While the planets they orbit are often too hostile to consider landing on, it seemed that their moons would reveal more about them and might hold the secret to life in our outer solar system. It was this idea that first ignited Falkenberg’s musical imagination.

Each movement expressed the unique character of a distant Moon, along with the human elation of its first sight. But half way through this process, Falkenberg’s creative trajectory took an unexpected turn. It was during the writing of Moon 3, Titan – Monsoons and Dunes, “something just did not feel right.” Imaginatively, she had been travelling further and further away from what she knew. “I began to feel homesick. Listening to this feeling, I understood that in order to move forwards, I needed to look backwards, at our own Moon.”

Also a member of the IAAA, she was uploading segments onto the platform, unaware that an astronaut might be listening to every note. Stott made contact, and shared her own perspective of being in outer space, and the breathtaking, life changing experience of seeing planet Earth from so far away, referred to as ‘the overview effect’:

“Colors felt new in space. Every color I thought I knew took on a different glow and translucence and iridescence. Seeing the Earth from space – it was high definition, crystal clear, and just glowed. Describing it to my son who was 7 at the time – it was like the brightest light bulb I could imagine splattered with all of the colors we know Earth to be. This stunningly beautiful glowing and colorful Earth orbited below against the backdrop of the clearest and blackest black I’d ever seen. Again, glowing and translucent and iridescent. There was a depth to this new blackness like nothing I had experienced before when looking up at the flat palette of the night sky from below. I felt transported into this blackness, feeling like I could reach into it. This was another wonderful reality check of who and where we all are together on this colorful, life-supporting planet in the otherwise, seemingly endless, blackness of space.”

As the Apollo 8 astronaut William Anders expressed: “We came all this way to explore the Moon, and the most important thing is that we discovered the Earth.” 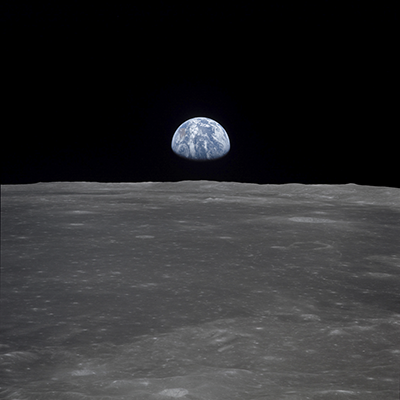 Stott asked Falkenberg to compose the theme for Apollo 8’s tribute video at the Kennedy Space Centre, and as the composer looked back over the momentous events of the Apollo 8’s Moon landing, she saw William Anders iconic photograph Earthrise, and began to understand how powerful this perspective could be. “Being heard by an actual astronaut – Nicole – ignited the love we all share for this planet. By simply coming together, we can solve all the problems, by collaborating we can soar higher and by listening to each other, hearing each other’s music, we can make this beautiful earth safe for future generations to come.” As the poet Muriel Rukeyser wrote, “The universe is made of stories, not of atoms.” 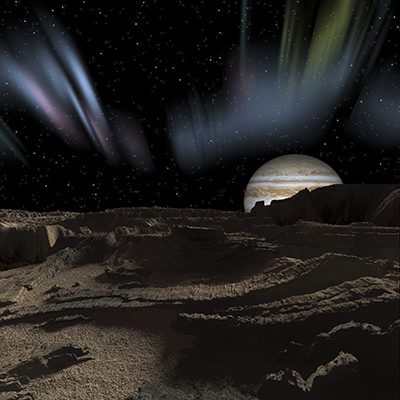 Women who compose full-length symphonies are as rare as female astronauts, but what defines both endeavours is collaboration. Falkenberg’s composition would eventually form the seventh movement of THE MOONS SYMPHONY, Earth Moon, and a holistic tribute to the power of an imaginative alliance – scientific exploration, musical composition and artistic creativity. As well as Stott and Falkenberg’s partnership, artists Ron Miller and Ed Bell were inspired by the work and became involved: space artist Miller as not only a collaborator but an inspiration: Falkenberg would compose with his art in front of her. Meanwhile art director and 3D animation artist Bell contributed glorious 3D works to the video accompanying Ganymede. “It’s the collaborative spirit that’s going on with this symphony, not just the healing vibrations in music, but because of the incredible entities around it: NASA scientists, and astronauts like Nicole Stott. Music is a universal language that everyone can relate to, just as everyone can relate to space and, of course, our beautiful planet,” said Amanda Falkenberg in an interview with Andrea MacDonald.

Moreover, rational and analytical approach to technology and science is often perceived as incompatible with the imaginative and experimental status of art. But THE MOONS SYMPHONY challenges the status quo with a fresh new perspective, one that harnesses the power of bringing everyone together. Like the series Out of this World, which shows how science and art depend on observation and synthesis, through Falkenberg’s music we experience what happens when we combine both.

Teaming up with talents like producer Rick Blaskey from The Music & Media Partnership, Falkenberg hopes to bring this piece of music to large audiences across the world at the big entertainment venues. Blaskey has been an Executive Producer of Music for many of the world’s major international sports events and international recording artists. Take a giant leap for mankind: join Falkenberg’s dream and share her interview with Andrea Macdonald from ideaXme found on radioideaxme.com.