Chrome Yellow  |  Source: How colour takes us on a journey

Noun: a bright yellow pigment made from lead chromate. 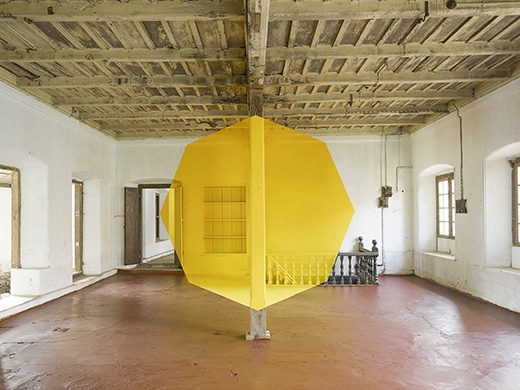 “There are painters who transform the sun to a yellow spot, but there are others who with the help of their art and their intelligence, transform a yellow spot into sun” 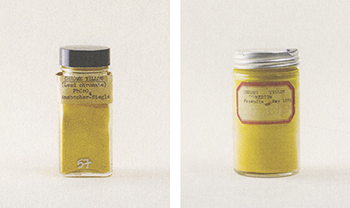 Chrome yellow was the first synthetic yellow pigment available in tubes, ready to be squeezed and slathered like butter. Such a little thing, creating portable paint tubes, but world-changing. Invented by the painter John Goffe Rand in 1841, tubes of paint transformed the way artists interacted with colour. “Without tubes of paint, there would have been no Impressionism,” said Renoir.

This sunny new pigment was created from a new element discovered within the scarlet-orange crystal crocoite: chromium. First extracted from the mineral by the French chemist Nicolas Louis Vauquelin in 1797, he named the new metal chromium based on the Greek word chroma or colour. Though the mineral was scarce, once lead chromate was synthesised in the laboratory the pigment came into commercial production in the early years of the 1800s and was quickly popular.

This gorgeous shade was enjoyed by one 19th century artist above all: Vincent Van Gogh. Born in Holland in 1853, his move to ‘The Yellow House’ in the sun-drenched village of Arles, south of France, sparked an outpouring of creativity. Within two years, he had completed nearly 200 of his most extraordinary works: Sunflowers, The Bedroom, The Yellow House, 37 self-portraits, and countless idealised landscapes of the surrounding countryside. Swathes of chrome yellow, emblazoned across countless canvases: straw hats, illuminated cafes, ripe husks, haystacks – and whirling, mesmeric stars, as bright as the midday sun, so intense against dark blue, puncturing the midnight sky in The Starry Night (1889). Stars are only yellow in the human imagination: galactic suns billions of miles away, guiding us through the night. He was prolific, on fire, as if he sensed that time was running out. Paul Gauguin, Vincent’s guest for several months in 1888, described the love Van Gogh had for yellow, in Essay about Free Art, 1894: “The yellow-chrome sun burst forth from the canvas, flooding houses and flowers. Oh yes, the good Vincent, that Dutch painter, a fondness for yellow; the sun baths bathed his soul. He was a man who feared darkness. He needed heat.” 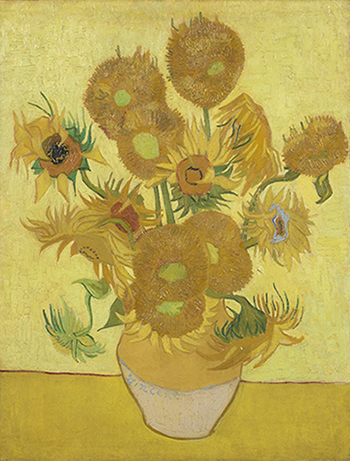 Van Gogh painted his Sunflowers in the early morning light: “The flowers wilt quickly, it’s a matter of doing the whole thing in one go”, he wrote to his brother. Their yellow intensity was created for the blue walls of his house, using only three tints of yellow, “and nothing else,” they are universally loved, and have come to define his oeuvre. They will be at Tate Britain until 11 August for The EY Exhibition: Van Gogh and Britain. This show presents the largest collection of Van Gogh’s paintings in the UK for nearly a decade, and reveals how deeply he influenced British artists.

Van Gogh adored chrome yellow so much, he not only painted abundantly with the pigment, but occasionally ate it, not a great idea considering how toxic the compound is. Known for bouts of deep despair, one wonders if he was trying to brighten his mood – taste its luminosity. His passion for the colour was so pronounced, many scholars and physicians have proposed he suffered from xanthopsia, an overriding yellow bias in vision, particularly as he had been prescribed digitalis for his epilepsy. This strong toxin, derived from the foxglove plant and still used for heart conditions, has ‘yellow vision’ as a side effect. Indeed, in Van Gogh’s portrait of Dr Gachet, 1890, the doctor who prescribed the digitalis, a foxglove is placed in the foreground.

However, if he had suffered from yellow vision, he could never have achieved extraordinary balance and harmony in his paintings. Dr Anna Gruener says, “Despite the dominance of yellow hues in van Gogh’s works, one has to recognise that the yellow is always balanced by the use of blue and/or white, even if applied very subtly.” Van Gogh adored contrast and how it heightens our emotions. Sunflowers were symbolic of nature’s eternal cycle and life’s transience to Van Gogh – so quick to bloom and then to fade, and his works also ask a question: what does an individual life mean? This links his work to the genre of ukiyo-e, Japanese woodblock prints known as ‘pictures of the floating, fleeting world’, inspired by the Buddhist concept of the world’s transient nature.

In 1854 the Convention of Kanagawa opened up trade between Japan and the west, and Japanese art arrived on the continent for the first time, electrifying Degas, Monet and Van Gogh among others. One cannot underestimate their influence on Van Gogh: he even painted a geisha in the style of Kesai Eisen, richly framed in chrome yellow. He also copied several of Utagawa Hiroshige’s One Hundred Famous Views of Edo, 1856. What’s striking is how Hiroshige uses yellow to colour bridges or paths leading into the distance – connecting colour between worlds, like the yellow brick road in The Wizard of Oz, or Cristo’s 2016 Floating Piers. It is the colour that returns us, both figuratively and literally, to the source – our sun.

Van Gogh adored contrast – how it heightens our emotions. Sunflowers were symbolic of nature’s eternal cycle and life’s transience to Van Gogh, but his works also ask a question. What does an individual life mean? This links his work to the genre of ukiyo-e, Japanese woodblock prints known as “pictures of the floating, fleeting world.” Ukiyo-e works were inspired by the Buddhist notion of world’s illusory and transient nature.

One cannot underestimate the influence of these works on Van Gogh, with their large areas of monochromatic colours and strong contours, most notably the works of Utagawa Hiroshige’s One Hundred Famous view of Edo (now Tokyo). Van Gogh owned and copied several of Hiroshige’s works. What’s striking is Hiroshige’s use of yellow, and how he uses it to colour paths leading into the distance or bridges. A connecting colour between worlds, like the yellow brick road in the Wizard of Oz that leads to the Emerald City, or Cristo’s Floating Piers, chrome yellow is the colour between things. It is the colour that returns us, both figuratively and literally, to the source – our sun. Perhaps, spiritually, Van Gogh found himself caught between two world views: reincarnation and the afterlife. Maybe he just dreaded the winter, how the cold wind would whip up his fragile mind into a frenzy, and simply found respite in chrome yellow. 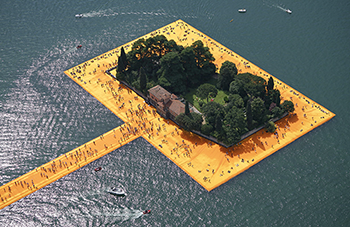 Chrome yellow also enjoyed a brief history of widespread use among other 19th century artists like Manet, Cézanne, Monet, Pissarro and Turner. Its popularity soon faded when it was found that the bright, opaque yellow on the artists’ palette darkened upon exposure to light. Eventually, a more stable opaque pigment, cadmium yellow, was introduced by the middle of the century.

During the 20th century, the shade of chrome yellow continues to be used for its high emotional impact, in particular on its own. Anish Kapoor, Tony Cragg and Anthony Caro’s large scale monochrome sculptures speak of the universal, mystical meaning of colour. 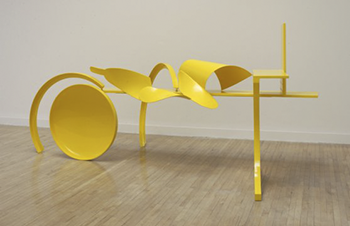 ‘Colour expresses something in itself. One can’t do without it; one must make use of it. What looks beautiful, really beautiful – is also right’ Anish Kapoor, Symphony for a Beloved Sun. Tony Cragg uses chrome yellow to trigger an automatic response and disrupt our sense of perception. Cragg’s Outspan is like a giant curl of butter, its bright yellow coat the result of Cragg’s innovative technique of applying car paint to bronze, rather than patina. On encounter we are struck with an irrepressible joy, like a child finding a giant piece of Lego. 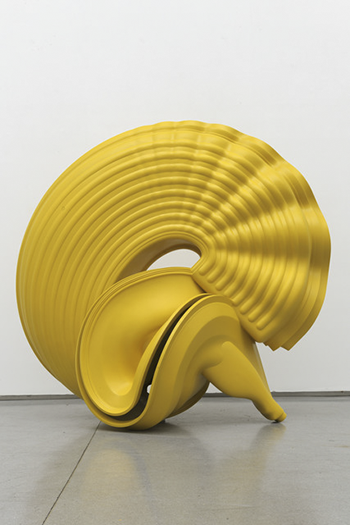 Mariele Neudecker’s current installation at the Dulwich Picture Gallery, And then the World Changed Colour: Breathing Yellow, the artist takes us through seeing yellow into breathing yellow. Her tank installation, Breathing Yellow, was commissioned as part of Harald Sohlberg: Painting Norway, and Neudecker takes inspiration from the dense birch trees of Norway’s forests to create a three-dimensional living landscape submerged underwater. She creates a world in between the chrome yellow Sohlberg used in his paintings and the intense yellow light created by the stained glass in Sir John Soane’s Mausoleum – part of Sir John Soane’s original stained glass design. It is a fragment of a world, and will continue to change and evolve at different times of the day, responding to the light conditions surrounding it. Deeply sensitive to how colour can illustrate balance or discord in the natural world, she creates a fully immersive environment that is hauntingly beautiful, because the colours are wrong. “I like the fact that you are in yellow either way… I wanted to create a sense of human residue.” 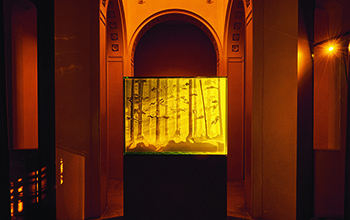 Yellow is a colour that reminds us of what is most precious in this life; most of our staple foods are yellow – corn, wheat, potato, yam, unbleached rice, sunflower oil – all ripened by our beloved sun. It is a colour that stimulates, but can also make us greedy, and much of society is driving down the highway of overconsumption: fossil fuels, fats and wheat, MacDonalds. Today we stand between “two roads in a yellow wood.”

Many individuals have shown us the benefits of taking the road “less travelled by,” but is this enough? Can one person make a difference? Certainly the 16 year old Greta Thonberg has shown us its worth a try. The colour yellow, like the yoke, is symbolic of what sustains us. As such it is also central to self-belief and acts to awaken the mind to possibility. It is the colour of renewal and new beginnings. In the words of Aldous Huxley, from his first novel Crome Yellow, “all that happens must mean something; nothing you do is ever insignificant.” 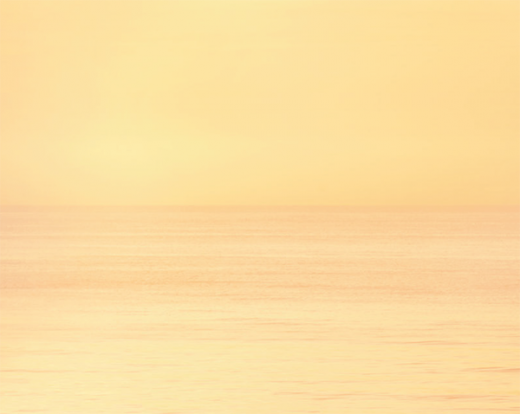 “To ‘know Thyself’ is considered quite an accomplishment.”
⎯L. Frank Baum, The Marvelous Land of Oz

Socrates said that the secret of change is to focus all your energy, not on fighting the old, but on building the new. I believe we all have the power within us to do more than we ever thought possible. Science explains colour is a series of electronic waves. Like music, both have the ability to transform and inspire. Ancient cultures and religions like Buddhism refer to the human aura as consisting of seven layers of energy. The third layer refers to the mental body which emanates from the solar plexus chakra and reflects mental functions based on the intellect and personal power. According to June McCloud, a colour therapy expert, yellow is associated with our left brain and stimulates our intellect, providing us with clear, rational thought. It strengthens our mind and our ability to gain knowledge and useful for concentration and focus. It is the colour of the self and ego and increases our feelings of self-worth and confidence. It gives us energy, and speeds up our metabolism. The negative of yellow, however, can be opinionated, restless, argumentative, evasive and boastful.

Swami Panchadasi, author of The Human Aura believes pure intellectual attainment, and the love of the same, “is manifested by a beautiful clear golden yellow”. If thoughts are energies, and we are what we think, then the belief exists that focusing on a warm yellow shade can help thoughts become clear and logical. Like the sun, yellow energizes us and can make us more decisive and sure of ourselves.