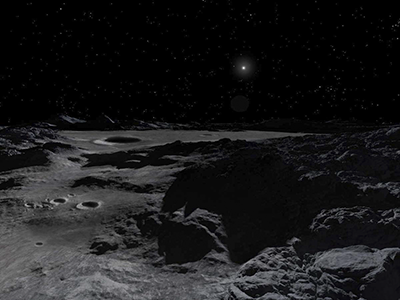 If you were to take eight people with you through the darkness of space on a circumlunar mission aboard the Starship super heavy, journeying more than 480,000 miles with them, who would it be? For the Japanese billionaire entrepreneur Yusaku Maezawa, the answer is: artists.

A former drummer in a punk band and founder of online fashion mall Zozotown, Maezawa, who famously bought a Michel Basquiat at auction for $110.5 million in 2017, was the first private individual to purchase a seat on Elon Musk’s passenger rocket at SpaceX. But he is not going alone, having bought all available seats. Maezawa says he intends to invite artists from different disciplines, including literature, film, visual arts, architecture and fashion. Once selected they will be tasked with creating works based on their experience, as part of a project called #dearMoon, for which Maezawa is host curator. 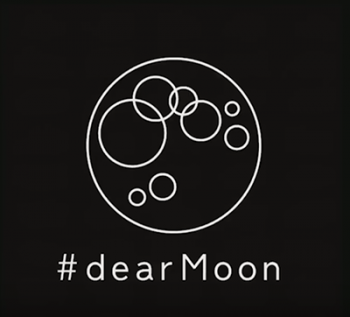 “Art has the power to promote world peace. I choose to go to the Moon with artists. If Pablo Picasso had been able to see the Moon up close, what kind of paintings would he have drawn? If John Lennon could have seen the curvature of the Earth, what kind of songs would he have written? If they had gone to space, how would the world have looked today? I hope that this project will inspire the dreamer within each of us.”

Who will he choose and how will they interpret what has fascinated artists since the beginning of time? This creative elite will head for the Moon in 2023, and names discussed widely in media include Vija Celmins, Anish Kapoor, Bjork, Ringo Starr and Damien Hirst – but nothing is confirmed. More importantly, the question is, what impact will the demystification of our celestial companion have on them?

Our constant companion, the Moon is fixed in orbit around the Earth but unlike our planet, it does not spin, eternally facing only one way. This means very few have ever seen the dark side of the Moon. As James Joyce said in Ulysses, “Her splendour when visible: her attraction when invisible”, the Moon has always acted as a ‘cultural mirror’ to society. Perfectly aligned with our planet, it goes through phases just like we do, reflecting the ideas and beliefs of all people around the world. There are blue moons and full moons, Harvest moons and super moons, and ancient civilisations used the lunar calendar to guide their rituals through the changing seasons.

“Every day it’s a different version of itself. Sometimes weak and wan, sometimes strong and fully of light. The Moon understands what it means to be human. Uncertain. Alone. Cratered by imperfections.”

Over time, the Moon has been interpreted as a god, a hollow rock, a floating round of cheese; always mysterious, and frequently the protagonist of extraordinary tales. Sir William Herschel, a prominent British astronomer and composer, believed aliens lived on the Moon and made regular observations about the progress of their construction projects. H.G. Wells proposed that the Moon was empty inside and filled with aliens (The First Men in the Moon). More recently, in the cult classic Who Built the Moon?, Christopher Knight and Alan Butler reveal an ancient system of sacred geometries about the Moon and other astronomical and planetary proportions, which leads the authors to believe that at some point in the future humanity travelled back in time 4.6 billion years to artificially construct the Moon… 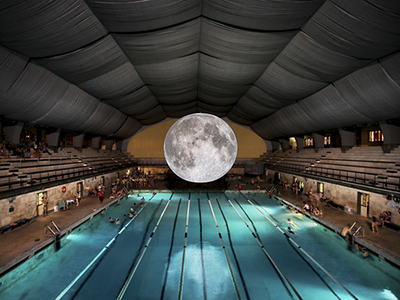 For most of history, the Moon was our only source of night time light. Regulating our own circadian rhythms and the Earth’s tides, the Moon was a mystery never to be solved. Many felt it should stay that way: As Septimus says in Tom Stoppard’s Byronic play Arcadia: “When we have found all the mysteries and lost all the meaning, we will be alone, on an empty shore.” But in 1962 John F. Kennedy launched his space programme in his hugely famous speech at Rice University, saying: “We chose to go to the Moon this decade… because the goal will serve to organise and measure the best of our energies and skills.” Many feared that our poetic relationship to the Moon would be undone.

As both NASA and SpaceX prepare to go back to the Moon, one artist has decided to bring the Moon to Earth, and observe our reactions. The Museum of the Moon is a touring artwork by UK artist Luke Jerram. Measuring seven metres in diameter, it features 120dpi detailed NASA imagery of the lunar surface. At an approximate scale of 1:500,000, each centimetre of the internally lit spherical sculpture represents 5km of the Moon’s surface.

Jerram who has been showing internationally for 21 years and has a multi-disciplinary practice, initiating numerous large scale, interactive art projects. The Museum of the Moon was inspired by his own experience of living in the coastal town of Bristol. As he cycled over the Avon Cut each day, he noticed the huge tidal variation, which prompted a period of intense research into the Moon. As his knowledge expanded, so did his sense of mystery and awe, and so he decided to try and bring the Moon to life, through a monumental work of art. The installation is a fusion of lunar imagery, moonlight and surround-sound composition created by BAFTA and Ivor Novello award winning composer Dan Jones. Each venue also programmes their own series of lunar-inspired events beneath the Moon. 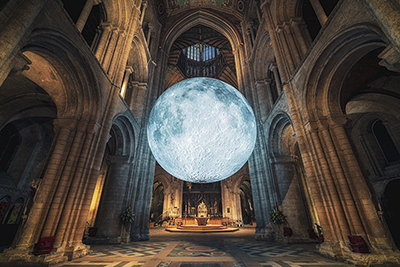 Surrounded by the blackness of space, traditionally we have coloured the Moon with deeply personal associations, and conceptually, what underpins Jerram’s work of art is that how we perceive the Moon depends entirely on where we are standing. Just as the Moon moves through phases and holds a different meaning for every individual, Museum of the Moon will travel to a number of locations both indoors and outdoors. This creates a new context – suspended above the altar in a cathedral or floating on a lake – changing the experience and interpretation of the artwork. As it travels from place to place, it will gather new musical compositions and an ongoing collection of personal responses, stories and mythologies, as well as highlighting the latest Moon science.

Moreover, as the sculpture is lit from within, it glows, reminding us of the Moon’s true wonder: moonlight. Like the love between Romeo and Juliet, in order for its light to shine brightly it needs the contrast of darkness, of night, to make it powerful. As author Shannon L. Alder says, “The Moon will guide you through the night with her brightness, but she will always dwell in the darkness, in order to be seen.”

The central question remains, will visiting the darkness of space and seeing the Moon reduce it to a rock, or enhance our sense of awe and wonder, and lead to more poetic musings? For Maezawa and Jerram the point is not that knowledge might unravel all the mystery, but that it might lead to deeper and more meaningful responses. 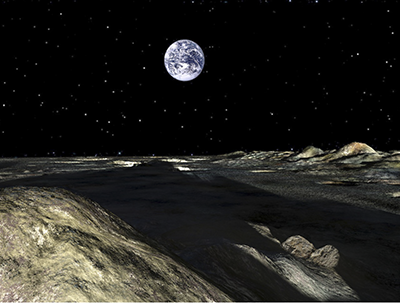