“Behind all seen things lies something vaster; everything is but a path, a portal or a window opening on something other than itself.” 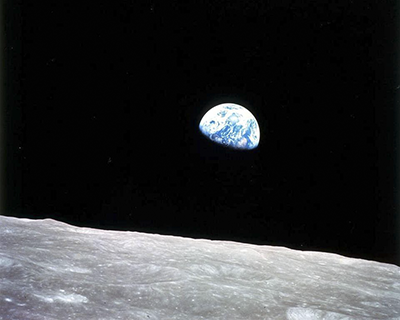 Imagine the heart-stopping thrill of breaching the earth’s atmosphere at 25,000mph, and then the darkness – indescribable, infinite – of outer space. Flying towards the Moon, beyond gravity, around 399,936 miles away you would enter into her orbit. Our constant companion: half-light in the darkest night, conducting the oceans as she waxes and wanes. Try to grasp the abstract, monochromatic immensity of circumlunar navigation.

Then picture this, standing alone on the Moon with only the sound of your breath in your helmet, looking out into total blackness. Imagine how you would feel when a spectacular coloured orb appeared over the crest of a lunar mountain: the Earthrise. Our beautiful blue pearl seen from outer space.

The first time this happened aboard the spaceship Apollo 8, there was a scramble for the Hasselblad camera. William Anders took the shot, capturing one of the most iconic space images to date: Earthrise. The only multi-coloured body they could see in space: more magnificent than anyone could have imagined. It was this perspective of our blue planet seen from the greyscale of the Moon that changed everything. “They should have sent poets because I don’t think we captured… the grandeur of what we had seen,” said Anders later. “We were all awestruck by the beauty of the earth in its color against the blackness of space. Everything we held dear was back on that blue planet.”

For the rare few who have travelled into space, it is often this new perspective on our own planet that far outshines anything else encountered. Described as ‘the overview effect‘ by the author Frank White in 1987, it is a cognitive shift in awareness encapsulating a profound understanding of the interconnectedness of all life and a renewed sense of responsibility for the environment. Nicole Stott, a retired NASA astronaut describes it this way, “The planet just glows. I remember trying to describe to my son, who was seven at the time, what it was looking like to me. I’m like, ‘Okay, the simplest way I can think is, take a lightbulb — the brightest lightbulb that you could ever possibly imagine — and just paint it all the colors that you know Earth to be, and turn it on, and be blinded by it.’ Because day, night, sunrise, sunset, it is just glowing in all of those colours.” (Source: www.nationalgeographic.com.au) 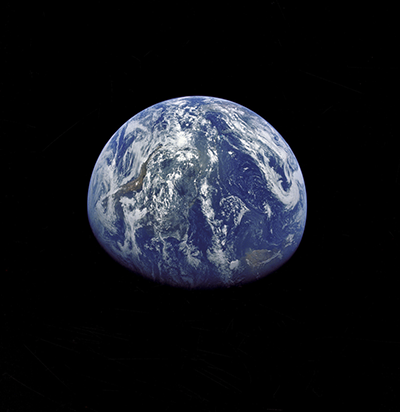 Earth Photographed by Apollo 15 on Voyage to the Moon, 1971 © NASA/JSC

Shared across the globe, Earthrise would Influence some of the greatest minds of the 20th century including Carl Sagan who, with Ann Druyan, was later tasked with creating Voyager’s Golden Record – a cultural time capsule for interstellar space. “Look again at that dot. That’s here. That’s home. That’s us. On it everyone you love, everyone you know, everyone you ever heard of, where every human being who ever was, lived out their lives…” (Source: Carl Sagan, Pale Blue Dot, 1994) To Sagan, scientific discovery was not only compatible with spirituality but a profound source of it.

“When we recognise our place in an immensity of light‐years and in the passage of ages, when we grasp the intricacy, beauty, and subtlety of life, then that soaring feeling, that sense of elation and humility combined, is surely spiritual. So are our emotions in the presence of great art or music or literature…”

― Carl Sagan, The Demon-Haunted World: Science as a Candle in the Dark, 2008

“For small creatures such as we, the vastness is bearable only through love,” Sagan remarked. (Carl Sagan, Contact, p.430, Simon and Schuster). It is the common denominator that runs through the creative and philosophical responses to Earthrise. It is love which animates The Little Prince, a fable about the act of growing up, by the aviator Antoine de Saint-Exupéry. The story begins with an encounter in the desert between a young boy and a pilot who has crash landed. During their lyrical, heartbreaking exchange, The Little Prince takes us on an interplanetary journey, and through his eyes we are reminded of what matters most in this brief life: “The most beautiful things in the world cannot be seen or touched, they are felt with the heart.” 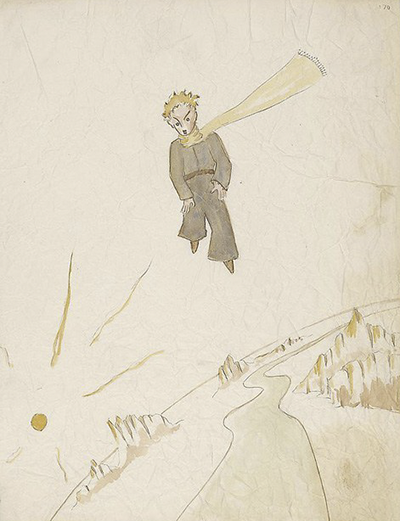 If everyone and everything we have ever loved is on this exquisite, fragile planet, it can only be a form of communal madness that we are not taking more steps to protect it. Indeed, the fact that we all need to take individual responsibility for its health – in essence a worldwide overview effect – is the premise behind an extraordinary new book written by businessman and philanthropist Angus Forbes. In Global Planet Authority: How We’re About to Save the Biosphere, published in September 2019, Forbes explains that we need a supranational body dedicated to looking after our globe, called into existence by billions of us: the Global Planet Authority (GPA). 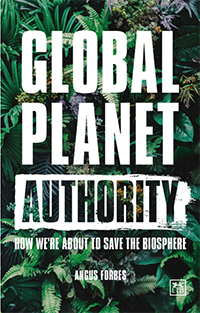 “We have no one to ask except ourselves in order to take the last step, to vote the GPA into existence. It will involve hard work and sacrifice in the short term, of that there is no doubt, but I believe that we are in fact desperate to live in a world of clear biophysical boundaries, to show that we can shoulder this, our greatest intergenerational responsibility. After all, we are all just humans and all part of the biosphere. As we damage it, we damage ourselves. If we restore and look after it, we restore and look after ourselves. We must, and can, overcome our limitations by an evolutionary leap in governance.”

It’s an extraordinary call to arms, but a powerful one: William Anders and The Little Prince would approve. 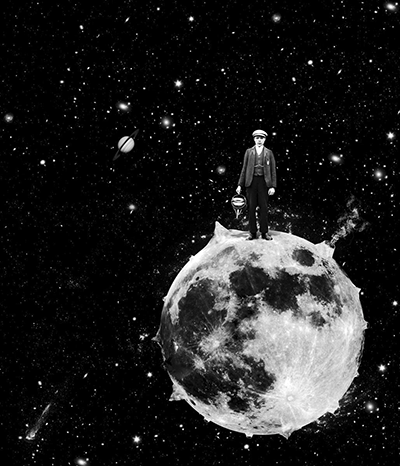