Snow White  |  Connections: How colour interacts with the wider world 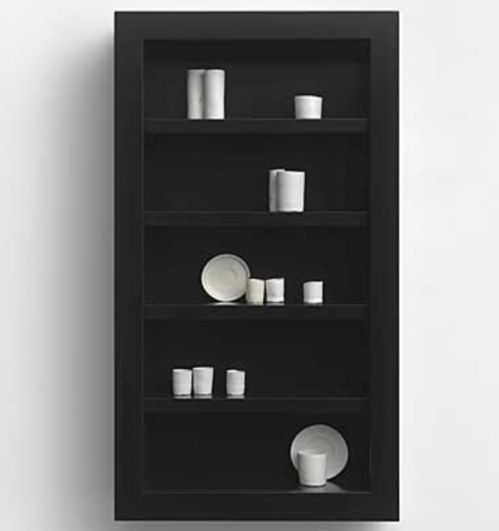 A Mind of Winter, 2015. 14 porcelain vessels in a wood and plexiglass vitrine
© Collection of Edmund De Waal, Photographer: Mike Bruce

Kenya Hara and David Scott Kastan both see white as being ‘on the periphery of life’, the colour of both milk and bones. Snow not only cleanses – it kills. Kastan describes this dichotomy with relish, writing: “White is the colour of unspotted purity and of complete absolution, of blank pages and clean starts. That is the second of its lies. White is also the colour of ghosts. Of skulls and bleached bones. Of maggots. White appals (etymologically means to make pale).” Says Hara: “It is difficult to sustain the purity of white because it is so easily contaminated; its beauty strikes us with such power because of our painful awareness of its transience.” That transience and fragility is why this hue is used to display innocence throughout the Judeo-Christian world. The Lamb of God, with its pure-white fleece; Isaiah 1:18 promising that “though your sins are like scarlet, they shall be as white as snow”, the Virgin Mary’s under robe – all point towards the promise of purity in this world and the next.

Yet that urge towards purity has a dark side… There are more than 50 variants of the folk tale Snow White across Christian Europe, all setting youth, innocence and purity against age and jealousy, tales designed to put older women in their place. In a world ruled by the male gaze – in Snow White that of the hunter, the dwarves and the prince – beauty, not personality, is of greatest value. In the original German story gathered by the Brothers Grimm, it is Snow White’s own biological mother who takes her into the woods and abandons her. The Grimm version is, quite literally, a whitewashing of a far darker and more uncomfortable tale. That phrase, by the way, comes from the world-wide practise of whitewashing houses where there had been a major illness outbreak: the limestone in the whitewash scoured the disease. In Angela Carter’s story The Snow Child, she makes the link of passive purity to patriarchal desires even more explicit: it is the Count who desires a child as white as snow, red as blood and as dark as raven’s wing: when this perfect, passive girl turns up, his wife the countess is gradually stripped of her possessions. Her ‘sin’ is that she is no longer perfect, untouched, virgin as snow.

The seminal fashion designer Karl Lagerfeld, who died in February 2019, understood the power of icon-making at a very deep level. He only wore black and white himself – even powdering his ponytail white. He said, “Black and white always looks modern… whatever that means.” A very simple way of saying that each generation reads whatever it wants into white and black.

The ceramicist and author Edmund de Waal describes how the first pot he ever made was white: “And I felt that it should always be that colour. That white was a way of looking at things, of concentrating, of taking away anything extraneous.” (De Waal in Conversation, V&A, 2015). In his show White in The Print Room at The V&A (2015-2016) he summed up his feelings about the colour with a series of “unexpected objects embedded in a dark silent place”, including a whitewashed sculpture by Cy Twombly, JMW Turner’s porcelain palette and his own exquisite Mind of Winter, from the poem by Wallace Steven, quoted in Source, a few white vessels in a black vitrine.