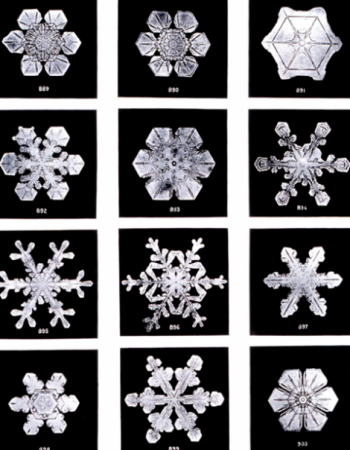 Studies among the Snow Crystals, Plate XIX, 1902. Wilson Bentley. From the Annual Summary of the Monthly Weather Review, Wikimedia

It takes only an inch of water to make 10 inches of snow, liquid expanded out into exquisite geometry, each snowflake a miracle of fractal clarity. Snow white is the epitome of purity and nullity, the Platonic promise of a perfect world to come or the Zen ideal of empty vessel – a space to think, grow and become.

Snowflakes are formed when minuscule water droplets freeze around dust particles creating an ice crystal. Sometimes water vapour coalesces around it, forming tiny arms: this is why no two snowflakes are the same. Light is a series of wavelengths that we perceive as different colours; we see a yellow wall as yellow because all other light rays are absorbed. So while the painter’s white is a pigment that absorbs virtually no light waves, reflecting white light, white light is actually comprised of different-coloured light waves, as shown by a ray of light through a prism. And light does not pass through ice easily. Instead, it bounces around within the crystals, some rays reflecting, some absorbed. With millions of ice crystals in a layer of snow, all this reflecting and absorbing leads to a neutral ground. It looks white – but it isn’t. Snow is transparent: in a sense pure, yes, but showing us whatever we want to see… 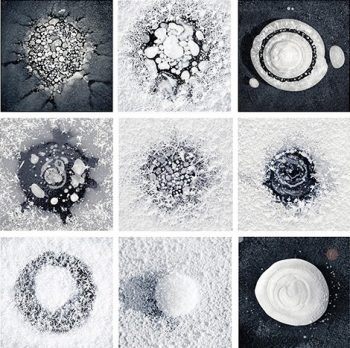 Ryota Kajita captures natural ice formations on ponds, lakes and rivers in Fairbanks, Alaska echoing the work of Wilson Bentley. Snow falls on water, freezes, melts, refreezes, and creates unique organic patterns on ice. The vapour in the air freezes as frost, growing intricate ice crystals. Kajita says, “When the seasons change from autumn to winter in Fairbanks, I cheerfully head outside to find ice. The window to find ice patterns is short, because ground surfaces are quickly covered with fresh snowfall. Wandering around looking for ice reminds me of boyhood treasure-hunting. I used to run out into the woods after school, exploring places that made up my neighbourhood. It was an adventure, and I enjoyed leaving my footprints on unknown areas… As an adult, photographing ice is rooted in those childhood adventures. It’s in that spirit that I strive to know the environment on a deeper level. Genuine curiosity propels me to actively involve myself in the place I live. That vital dialogue between yourself and your surroundings develops your thoughts on how you live in a place, and face bigger issues like global climate change. Everything — even if it appears to be insignificant —connects to larger aspects of our Earth”.

The Snow Moon – which rose in the sky in February 2019 – reminds us of our tiny place in the universe. It was the second of the year’s super moons, of a snow-white purity after the Blood Moon, and sailed through the sky like a vast ghost – native Americans also called it the Hunger Moon, rising as it does in the starveling time of year. It is called the Snow Moon not just because of its colour but because it is the harbinger of snowfall, its huge gravitational pull affecting the weather, just as different hues pull at our emotions and memories. 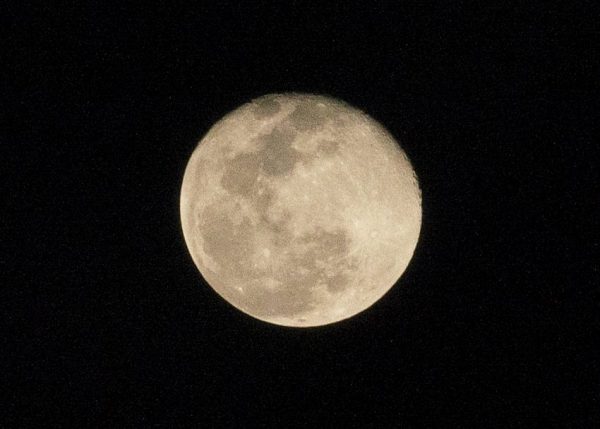