Aquamarine  |  Source: How colour takes us on a journey

A drop of sea, rounded as beachglass
Or a tablet of eucalyptus
On the tongue, its color
Soothes the eye with the cool
Underside of leaves. This
Is the color of sky just before
Sunrise, the air in the valley
Still freshened from stars.
It’s the color of water gulped from the dark
Green hose after a ride on the mesa
And the color to ease forgetfulness,
Another thirst, giving words
Back to a watchful timid child
Who murmured stories late at night.

It’s the color of joy
Only deeper, perhaps forgiveness
When the self’s right hand
Reaches for the left and holds it
At last, resting. This is the color
that filled my eyes last night
under the three-quarters moon, even though
the pale light flooding the corral
wasn’t really the color of the sea.
You took my hands, and kept them
long enough to warm them into
a single shape – it shimmered
like a knot of roots lifted
from broken soil. Then you let them go
slowly, as though retracing
that touch for both of us to keep. 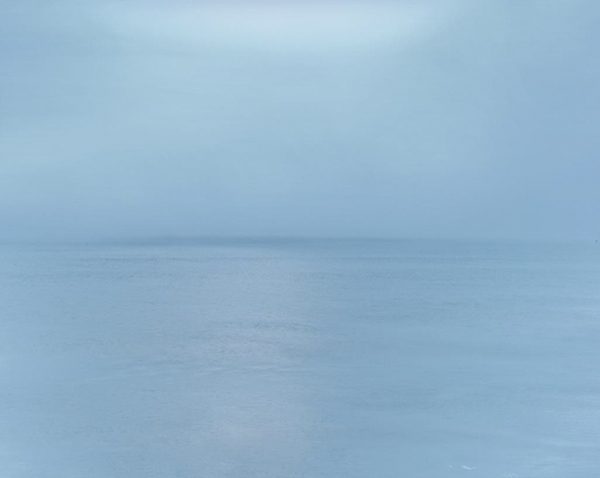 In 1862 the German zoologist and philosopher Ernst Haeckel, reeling from the death of his beloved Anna, stalked along the seashore, staring into pools the colour of mermaid’s tears. The young professor had lost his wife on his 30th birthday, and plunged into unimaginable darkness, writing: “I am dead on the inside and dead for everything. Life, nature, science have no appeal for me. How slowly the hours pass.”

Walking along La Basse Corniche in Cannes, he stopped, mesmerised, and for several hours watched a medusa jellyfish in a rock pool. “…Her tentacles which hang like blond hair ornaments from the rim of the delicate umbrella-cap and which with the softest movement would roll up into thick short spirals.” He made an exquisite, detailed sketch and named the species after his departed: Mitrocoma Annae (Anna’s headband). Slowly, as delicately as tentacles unfurling, Ernst healed, entranced by beauty of the ocean’s gifts. Already the author of a seminal book on microscopic plankton, the exquisitely-illustrated Radiolaria, Haeckel named more than 150 species and became one of the 19th century’s most celebrated free thinkers.

The Art and Science of Ernst Haeckel. Edited by Rainer Willmann and Julia Voss © Taschen, 2017.

Aquamarine is the colour of seawater, of love and loss, warm shallows and eerie depth; its beauty visible from Yellowstone’s super-heated pools to Iceland’s frigid lagoons, drawing lovers and truth seekers. It’s a shade that soothes and heals: it draws out the heat, drinks all the red. The vitreous teal of shallow waters, mixed with sunlight, the hue floats between cyan and spring green. Aquamarine is the colour of paradise; it gives white sandy beaches their silhouette. Further north it illuminates ancient icebergs of the Jokulsarlon Glacial Lagoon.

Aquamarine’s name comes from the Latin aqua marina, literally meaning seawater, while the colour is named after the mineral; a type of blue beryl, from the Greek beryllos which meant ‘precious blue-green colour-of-sea-water stone.’ The colour and gemstone define each other, just as the micro reflects the macro. It’s a stone whose meaning is tied to its hue, believed to induce calm and provide clarity, and found in rivulets of Precambrian metamorphic (granite) rock across nearly every continent – from Brazil through Mexico, Mozambique across to Angola, up through Afghanistan, and into Europe as far as Sweden. It forms in a network of time-compressed tributaries – Pegmatite veins – their geomorphology defined by the earth’s moving surface, a smooth wave-like motion, raised above sea level.

One of nature’s primordial colours, aquamarine was used repeatedly in the drawings of the Swiss artist, thinker and healer Emma Kunz, fine geometric abstractions softened with gentle washes of aquamarine. From April-May 2019 her Visionary Drawings were on show at the Serpentine Gallery, the same venue that curated the first major survey of Hilma af Klint. Kunz’s ‘energy-field’ drawings are an extraordinary intermapping of the micro and macro forms she observed in nature, portraying the connection between all things. They vibrate with subtle harmonies of colour and form and follow a mystical logic. Like Klint, Kunz felt her works would not be understood for a long time, and was correct: they prefigure the quantum leap science has recently taken. They are interpretations of something sensed – and rather wonderfully she was correct, visually at least: they echo String Theory. 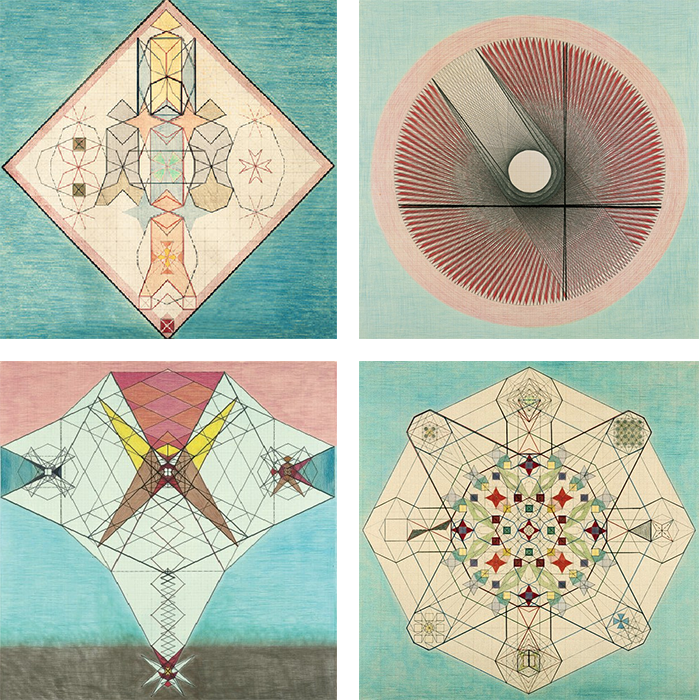 The illustrations are mysterious yet soothing, a pattern that feels intrinsically right, because the clear tones she uses sing like a bell. One of aquamarine’s central characteristics is clarity: when the first eyeglasses were constructed in 13th century Italy, the lenses were made of beryl because glass could not be made clear enough. This association remains today.

One can trace the stone from the summit of Mt Antero in the Swatch Range in central Colorado, to the Big Horn Mountains of Wyoming, via the Sawtooth Range of Idaho, and down into South America, often cradling the far rarer and more fragile emerald. In 1910 the largest aquamarine gemstone ever was mined in Marambaia, Minas Gerais, Brazil. Weighing more than 110kg, its dimensions were equivalent to partially melted icebergs from the Nuuk Kangerlua fjord in Greenland, placed by Olafur Eliasson outside the Tate Modern in winter 2018. It was devastating to see those luminous ice sculptures reduced to puddles; impossible not to consider the melting of other ice. Aquamarine focuses our mind on the impact of climate change on the earth’s most fragile environments: warming seas bringing so many species to the brink of extinction; once permanent glaciers reduced to ghosts of themselves from Chile to Alaska. This keys into our realisation of loss – unlike the largest cut aquamarine, the Dom Pedro, housed in the Smithsonian Institution’s National Museum of Natural History, once melted they are gone forever.

In from July 2019-January 2020 Eliasson returned to the Tate Modern for a major survey of his career, with works never-before-seen in the UK. His installation featured water, mirrors and light, combining to provoke a deeper sensory perception. Rainbows spout from a punctured hosepipe, an entire wall is covered in Icelandic moss, and a tunnel of kaleidoscopic mirrors cast our coloured shadows on the wall. Visitors are not only be immersed but made aware of our impact on the environment around us. As Ullman puts it in her beautiful poem at the beginning of this piece, aquamarine is, “The color to ease forgetfulness’, and a shade for love: not just for each other but our environment. 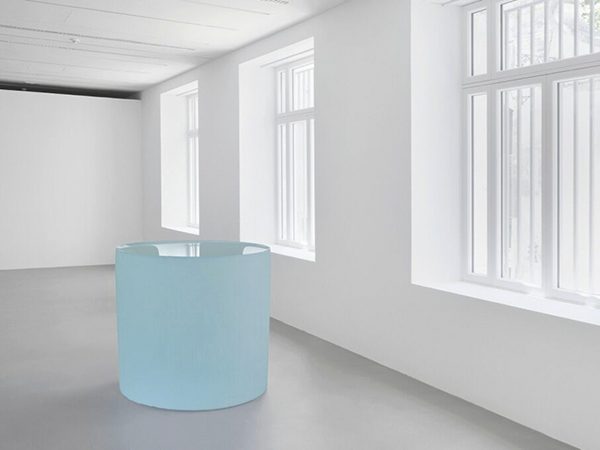 Roni Horn, Untitled (“I deeply perceive that the infinity of matter is no dream.”), 2014,
solid cast glass with as-cast surfaces © Courtesy of the artist and Hauser & Wirth, New York.

One cannot leave discussion of aquamarine without referring to the cast glass works by American multi-disciplinary artist Roni Horn. They reflect light as illuminated from within and draw the eye in like pools of water. I remember encountering these barrel-shaped glass vessels and feeling their silence, as they seemed to glow and vibrate with an intense frequency. Staring at them I realised what had taken my breath away, they were just like water. Delicate and ethereal yet monumental. When viewed from the side, the glass is frosted. When viewed from above, the glass seems transparent, the glass taking on a rippled or watery effect. Dare I touch it? I have always wanted to. Horn understands water as “a form of perpetual relation, not so much a substance but a thing whose identity is based on relation to other things.”