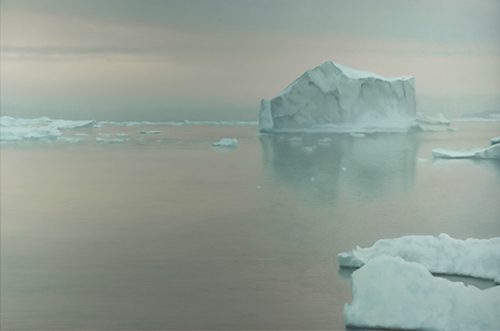 “All the books of the world full of thoughts and poems are nothing in comparison to a minute of sobbing, when feeling surges in waves, the soul feels itself profoundly and finds itself. Tears are the melting ice of snow. All angels are close to the crying person.”

In 1972, Gerhard Richter took a trip to the icy expanses of Greenland. There, escaping from personal misery, he took a series of photographs, ones he would return to ten years later after his marriage ended. “The project was…an excuse for getting away… Trouble in my marriage was reaching a climax. Going into the ice could be interpreted as longing for a place where one feels safe – just so long as there is no life, only ice.”

From this trip, three extraordinary ice paintings emerged: Eis, Eisberg im Nebel, and Eisberg (pictured), an extraordinary feat of photorealism, a frozen seascape exquisitely rendered in coldest aquamarine and the peach tones of just-past sunset – in 2017 this rare work sold at Sotheby’s for £17.7 million. Desolate and honest, the three paintings collapse time between two moments: they express feelings the artist resolved as he came to terms with the loss of his relationship. Some even think it is the closest Richter has ever come to self portraiture.

Richter was painting at the dawning of Photoshop, an era when the universally-accepted truth of a photographic image – an authentic imprint of light in one moment – was dissolving with the air brush tool. Photographers have manipulated their images since the beginning, but Photoshop made it universal. Eisberg stands as a reenactment of a moment of loss, seen through the clear lens of time; itself a manipulation of loss. The canvas also looks back, paying a stylistic homage to 19th Century German Romantic painter Caspar David Friedrich, whose atmospheric landscapes were meditations on light and the natural world. In Friedrich’s famous piece The Sea of Ice (1824), the stricken HMS Griper, engulfed by stone-like shards, is seconds away from disappearing altogether on the Northwest Passage – man at the mercy of nature. 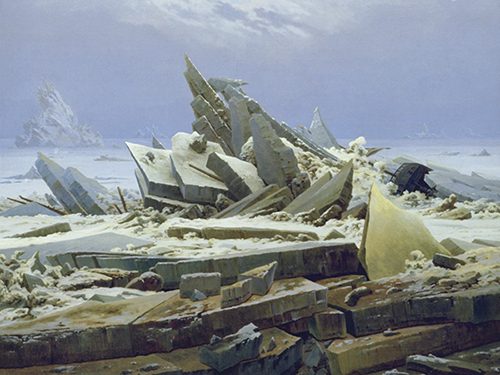 Why then, when snow and ice are transparent, do icebergs display such delicate aquamarine tones? Unlike the surface white of an iceberg, comprised of layers of snow full of air pockets that naturally reflect light (Snow-White] its body is marine ice, which has been subjected to extraordinary pressure for millennia, forcing out reflective bubbles – an iceberg can be as old as any mineral, chunks of liquid geology. Marine ice has a density similar to water – and also, satisfyingly, the semi-precious stone aquamarine, which absorbs red light because of its hexagonal crystal system, conducting and absorbing in almost the same way as an iceberg. The colour is a clue to the underlying structure of things. At a microscopic level an infinite variety of ions, atoms and molecules are incorporated into the crystal, which give rise to the range of colours that can be found, in its form, and mimics the way sea water changes hue; a perfect flow of stone to water to name. In light terms, the colour aquamarine has a predominant wavelength of 490-520 nanometres. Red is leached away: aquamarine remains. 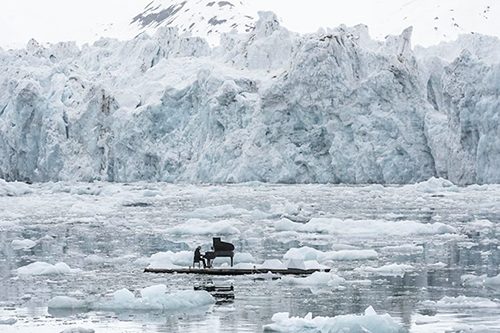 Perhaps then icebergs draw the imagination because we sense their extraordinary chemistry: water pressured into gemstone hardness: monolithic pieces of natural sculpture, glowing with time-compressed colour. As the climate changes, we are seeing more icebergs than ever before. The Arctic shelf is collapsing, ancient ice melting away, its colours fading back into liquid. In 2016, the Italian pianist Ludovico Einauldi premiered a searing piano solo called Elegy for the Arctic, floating amidst the icebergs of Svalbard, accompanied by the lapping water, cry of gulls – and the roar of huge chunks of ice shuddering into the ocean only metres away. 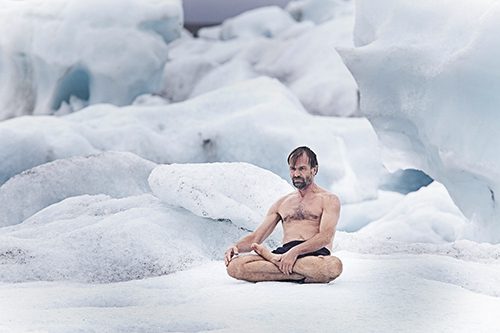 If aquamarine is the colour of love [Connections] it links not just to our relationships but to the environment. It is also an invitation to do more and be more – to face the ice inside us, transform our fear and apathy into action and reach out to save what we love. As extreme athlete and philosopher Wim Hof states in Becoming the Iceman, “We can do more than what we think. It’s a belief system that I have adopted and it has become my motto. There is more than meets the eye and unless you are willing to experience new things, you’ll never realize your full potential.” 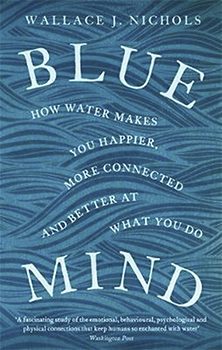 In Blue Mind: How Water Can Make You Happier, More Connected, and Better at What You Do, Wallace J. Nicholls explains that we all have a ‘blue mind’: “A mildly meditative state characterised by calm, peacefulness, unity, and a sense of general happiness and satisfaction with life in the moment”. It’s a state that sparks creativity, allows us to unknot knotty problems and helps our brain relax and rejuvenate. The blue mind is a remarkable shortcut to happiness, and that, “Makes us more creative, productive and effective work; gives us greater self-control and ability to cope; we are more charitable, cooperative and empathetic; it boosts our immune, endocrine, and cardiovascular systems; lowers cortisol and heart rate, decreases inflammation, slows disease progression, and increases longevity,” says Nicholls. Modern life produces fatigue, stress and overstimulation, which finds relief in the uncomplicated, gently stimulating perception of a natural environment. But we must do more for the environment in return. As Hof says, “Life is like a dewdrop on a grass leaf. When it slips away, it’s gone forever.”

Aqua Charities and Movements we love: