“Had I the heaven’s embroidered cloths,
Enwrought with golden and silver light,
The blue and the dim and the dark cloths
Of night and light and the half-light;
I would spread the cloths under your feet”

Consider Kate Middleton on the day she and Prince William announced their engagement in 2010, a day when every camera in the world was trained upon her.  Wearing a silk jersey wrap-around dress by Issa, she looked elegant, pulled together, sensible, respectable, the perfect bride for a future king. Her beautifully cut dress makes no statement: it is not severe black, vampish red or ingenué pink. She embodies Pantone’s description of the colour as a, “Reassuring presence instilling calm, confidence and connection.”  In short, she looks like a safe pair of hands, and that is exactly the message ‘the Firm’, (as Prince Philip calls the royal family) were trying to send out. A quick look at katemiddletonstyle.org reveals just how often the Duchess of Cambridge wears this flattering, timeless shade, most recently in Alexander McQueen. It is perfectly on message. During their courtship some elements of the media derided her for her non-aristocratic antecedents, but in her smiling elegance, solidarity with her husband and work with children’s and mental health charities, Her Highness has proved herself a true blue-blood.

This sense of dependability and tradition means classic blue is used by countless brands in their logos, among them PayPal, GE, Samsung, Ford and Facebook. Disney, one of the most valuable brands in the world, takes it a step further, deliberately echoing the shade of the dreamy night sky seen behind their famous castle. And, as Steff Yotka says in Vogue, “This exact shade of unfiltered blue is also the color of America’s Democrats, of England’s Conservatives, and of the European Union flag.” It is the most popular colour for men and women.

The reasons for the hue’s power are twofold. The first is its association with the colour of the darkening sky, the peaceful moments before we sleep – classic blue makes us feel serene, safe. As Pantone says, it offers, “A sense of peace and tranquility, helps concentration, clarity and reflection.” This natural aspect is what calls to us so deeply. For as long as man has looked up at the stars, we have wondered what is out there, beyond the blue arc, whether there are things bigger than ourselves, what our place is in life. Colour therapist Constance Hart told Vogue that this shade of blue also possesses psychic possibilities. “If you have enough exposure to this color over time, you can begin to notice that you’re going to be tapping into some of the higher realms of the mind, the intuitive mind,” she said. “Every human mind does have psychic ability and most people are not tapping into that part at all, but it’s always there and it’s always available.”

The second element is blue’s unshakeable association with the Virgin Mary, the faithful, steadfast Handmaid of the Lord. Blue in iconography literally represents the heavens above: transcendence, mystery, and the divine, perfect for the Divine Mother. The wealth involved in painting her robes and sky with ultramarine cemented its association with money, and why it is used so much by the corporate world. It’s also flattering on all skin tones: given a twist with striking shapes and rich materials it is a strong, evocative colour in fashion too, and was used heavily on the runway for Summer 2020. We loved Balenciaga’s incredi-blue set and vast haute couture bell dress, while Givenchy’s exquisite three-dimensional flounces and huge hats were a deliberate nod back to the designs of the master himself, Hubert de Givenchy. Gucci’s show took a classic blue silk shift – something the Duchess of Cambridge might wear – and ripped it to the navel, accessorized by a dog collar and whip. This was not your everyday blue.

Yet, like so many colours, blue has a dark side. Similar to the vastness of the sky, classic blue can be cold, unforgiving and sad. It is not a human-sized colour like pink or green, but one that speaks of eternity and how tiny we are: of the extraordinary breadth of the universe and our place in it, a frightening as well as a magical concept. We talk of feeling blue, of being blue-devilled. Blue is multi-sensory. It lends its name to an entire genre of music, born in the Deep South from African musical traditions, spirituals and the anguish of, and freedom from, slavery. In one of the earliest descriptions of the blues, from the activist and teacher Charlotte Forten in 1862, she describes songs sung by the slaves, including the deeply melancholic Poor Rosy, that: “Can’t be sung without a full heart and troubled spirit.” Musicians from Memphis to Chicago told their own difficult story through its microtonal slides and bends. Such was its power (and remarketed as rhythm and blues in the 1950s) it became the dominant musical style of the African-American community throughout the 20th century. In the 50s and 60s it reached its apogee with artists like Muddy Waters (who was raised by an ex-slave in a log cabin), Howlin’ Wolf (who recorded at least 10 songs with blues in the title) and BB King (known as the King of the Blues, while white artists began to record blues songs, not least Chuck Berry and Elvis Presley. In terms of sales and cultural reach, R&B and its spin-offs is the dominant musical artform in the western world right now, testament to its power to touch the heart.

In film too, this link to emotional pain is so clear. In Krysztof Kieslowski’s incredible, powerful Trois Couleurs: Bleu, a devastated Juliet Binoche attempts to come to terms with the death of her husband and young daughter, withdrawing into a Paris subtly impregnated with shades of blue, her only possession a blue necklace. She is gradually persuaded back to life by the care of those around her, finishing her composer husband’s magnum opus. The multi award-nominated, emotionally powerful Waves (2019), written and directed by Trey Edward Shults, also centres around sadness, as two siblings navigate love, loss and parental expectations in a series of exquisite vignettes, beautifully utilising the deep blue seas and the vibrant landscape of South Florida.

Classic blue might feel remote and safe, but as always with any natural resource, it can be corrupted. The art director and photographer Elisabeth Hoff, who has shot everyone from Emily Blunt to Pippa Middleton, produced a beautiful, unsettling film for the Marine Conservation Society to publicise the Great British Beach Cleanup. Drowning in Plastic (2019) features a siren-like woman floating in exquisite blue – marred only by the plastic waste around her, trapping her in a half world; surrounded by space yet unable to escape. 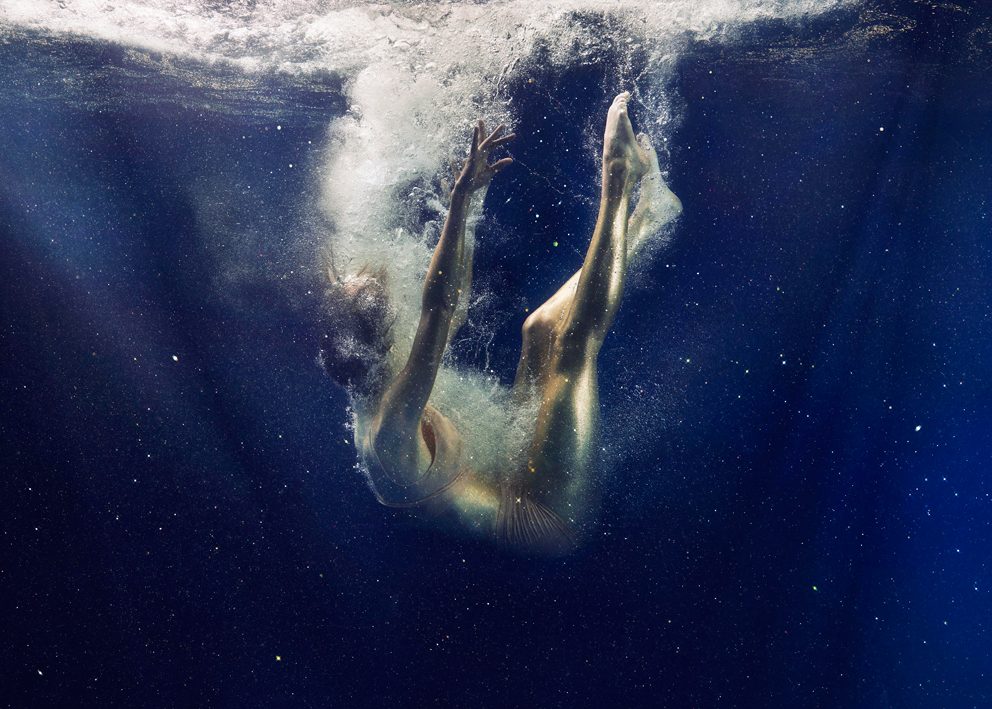 In a strange way it comes full circle to the Duchess of Cambridge again, and another princess who was unable to leverage the safe sense of blue: Meghan Markle. After a fractious two years where both the Duke and Duchess of Sussex spoke of their mental anguish over media intrusion and stifling expectations of the traditional role of a prince and princess, they have shed (for good or ill) the shackles of blue-bloodedness and fled to Canada. Their horizons have broadened, and their possibilities have extended away from respectability and dependability into something more limitless and uncharted. We wish them well.